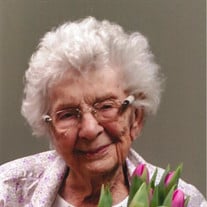 Leila Emanuel, 95, of Oskaloosa passed away Sunday, May 20, 2018, at Oskaloosa Care Center, which she considered her home. Leila Mae Emanuel, daughter of Oral Vino and Cora (Froning) Crawford, was born, January 2, 1923, at Mason City, Iowa. She attended school in Mason City and moved to Oskaloosa at age 17. November 7, 1941, Leila married the love-of-her-life, Robert Glendean Emanuel. They made their home in University Park where they raised their five children. Leila was a 40-year member of the University Park Women’s Club. She enjoyed camping and traveling with her husband before his health began to fail, and he passed away, May 10, 1976. Leila’s family was always her first priority, and she treasured the times they had together. Leila’s family includes her children: Dennis (Jane) Emanuel of Wentzville, MO; Gweneth (Bernie) Bresee of Oskaloosa, Pamela Emanuel of Oskaloosa and Elana (Terry) Morrow of Oskaloosa; nine grandchildren; 23 great-grandchildren and three great-great-grandchildren. In addition to her parents, she was preceded in death by her husband, Robert of 34 years; a son, Jack and his wife, Lynda Emanuel; and two brothers, Dwain Crawford and one in infancy. Funeral services for Leila will be held at 11 a.m., Friday, May 25, at Langkamp Funeral Chapel with Pastor Don Long of the Valley Church in West Des Moines, Iowa officiating. Burial will be in University Park Cemetery. The family will greet visitors from 10 – 11 a.m. on Friday morning. Visitation will be held from 9 a.m. to 7 p.m., Thursday. Memorials can be made to the Stephen Memorial Animal Shelter. Memories and condolences can be sent to the family by visiting langkampfuneralchapel.com.

The family of Leila Mae Emanuel created this Life Tributes page to make it easy to share your memories.

Send flowers to the Emanuel family.