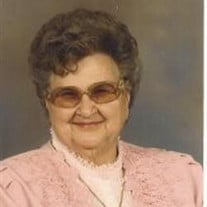 Lena Mae Wymore De Jong : Lena was born December 26, 1916 in Mahaska County, to Jessie and Alice Stringfellow. She was a graduate of Rose Hill High School. Lena married Harmon Glenn Wymore on December 15, 1935 in Oskaloosa, Iowa. Harmon served as an officer with the Oskaloosa Police Department for many years. He passed away March 16, 1987. Lena later married Bill J. De Jong of Knoxville and moved to Knoxville at that time. Bill passed away in 1995 and she then returned to Oskaloosa. Lena had worked at Ideal Manufacturing as a night supervisor for many years, and was later employed by Rollscreen, from where she retired when reaching the age of 65. Lena is survived by her two daughters; Nancy Criss of Oskaloosa, and Judy Kropp of Carrollton, Texas. Five grandchildren; Rick and (Jeri) Bittner, and Brian Bittner, all of Oskaloosa; Sterling and (Krista) Kropp of Texas; Christina (close friend, Randy Harris) Smith of Oskaloosa; and April and (Jeff) Music of Texas. Nine great grandchildren and four great great grandchildren also survive her, as well as several grandchildren and great grandchildren from her husband, Bill. Lena was preceded in death by both husbands; her parents; one grand daughter, Vicki Bittner; a son in law, Robert Kropp; one brother, Paul and one half brother, Robert Stringfellow; and two step sons, Frank De Jong and Bill De Jong Jr. Lena became a Christian under the ministry of Rev. Max and Mae Johnson, the pastor and wife of the Assembly of God Church of Oskaloosa. In 1947 she dedicated her life to God, and began to teach Sunday School, served as Sunday School Superintendent, and a Prayer Warrior. Lena enjoyed doing crafts, and baking in her spare time. She especially enjoyed spending time with her family. (No Obituary Text Available) PDF Printable Version

The family of Lena Mae Wymore De Jong created this Life Tributes page to make it easy to share your memories.