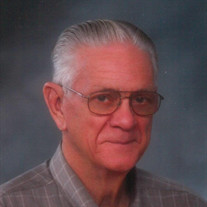 Leonard Allard, 84, of Oskaloosa passed away Friday evening, June 26, 2020, at Accura Healthcare in Knoxville, Iowa. Leonard Arthur Allard, Jr., son of Arthur Allard, Sr. and Iona (Roland) Allard Yacinich, was born March 10, 1936, in Knoxville, Iowa. He grew up in Knoxville, where he attended school. His first marriage was to Charlotte Grundrem, and to that union, three children were born: Naomi, Rebecca, and David. They later divorced. On September 12, 1980, Leonard married Judy Landers Noel at Allerton, Iowa. Through the years, Leonard worked for the Wabash Railroad, he was a specialty spray painter of windows at Pella Corp., and as a painter at Vermeer Corp. For 15 years, Leonard owned and operated a painting service doing interior and exterior residential painting. From 1993 to 2010, Leonard worked at the Oskaloosa Middle School as a custodian until health concerns forced his retirement. In his free time, Leonard loved to hunt and fish; he also was an amateur taxidermist, creating many deer heads and raccoons. His most cherished times were those he spent with his children and grandchildren. Leonard’s family includes his wife of 40 years, Judy of Oskaloosa; his children: LaCinda (Troy) Allard-Shilling of Oskaloosa, Christine (Gregg) Davison of Perry, Jason (Danelle) Noel of Polk City, Bryan (Angie) Noel of Oskaloosa, Naomi (Tim) Brantley of South Bend, IN, and Rebecca Allard of Rolla, MO; seven grandchildren: Jacob, Zachary, Katelyn, Mia, Jayden, Amanda, and Christopher. He is also survived by a brother, Rev. John (Janice) Allard of Oskaloosa. In addition to his parents, Leonard was preceded in death by a step-father, Victor Yacinich, and a son, David Allard. Funeral services for Leonard will be held at 10 a.m., Tuesday, June 30, 2020, at Langkamp Funeral Chapel with Rev. Wolfe of the First Pentecostal Church officiating. Burial will be in Forest Cemetery. Visitation will begin at 10 a.m., Monday at the funeral chapel; the family will greet visitors from 5-7 p.m. According to the rules put in place by the Iowa Department of Public Health, proper social distancing and reasonable personal protective equipment are advised for attending this public event. In lieu of flowers, memorial contributions may be made to the family.

The family of Leonard Allard created this Life Tributes page to make it easy to share your memories.

Send flowers to the Allard family.