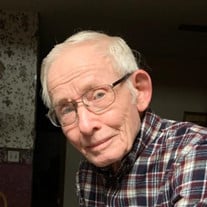 Leroy Eldon Wymore, 93, Of Oskaloosa, passed away December 8, 2020, at the Mahaska Health Hospice Serenity House in Oskaloosa, Iowa. Leroy was born on February 20, 1927, in rural Keokuk County to Howard Ray Wymore and Lillie Mae Alexander Wymore. He graduated from Oskaloosa High School at age 15 and shortly thereafter served in the United States Navy. After serving, he returned to the family farm and did Custom Hay Baling. In his later years, Leroy continued to care for the family farm, with help from his family. He had a love of the outdoors, traveling, and camping out West extensively. He enjoyed working hard and was an expert machinist. He loved to work with his hands, "tinkering" on many projects and machinery. On December 23, 1951, Leroy was united in marriage to Alvada L. McCarty. To this marriage, two sons were born, Lee Allen Wymore and Michael Don Wymore. Alvada passed away on February 10, 1977. Leroy was later united in marriage to Terrie North Sells on May 10, 1986. One son was born to this marriage, Jonathan David Leroy Wymore, who was welcomed home from the hospital by three older sisters whom Leroy loved and cared for as his own, Brooke Ann, Keely, and Rebecca Sells. Leroy worked at Clow Corporation for well over 30 years and retired in 1987 as Foreman of the Brass Machine Shop. He was baptized as one of Jehovah's Witnesses in 1986 and served faithfully until his death. He assisted many in furthering their knowledge of the Bible and its promises for the future. Leroy is survived by his wife of 34 years, Terrie, and three sons: Lee and Joyce Wymore of Ames, Iowa, Michael and Erin Wymore of Denver Colorado, and Jonathan and Tara Wymore of Oskaloosa; three daughters: Brooke Ann and Justin Beal of Oskaloosa, Keely and Jeff Choate of Marshalltown, Rebecca and Jerome Ellis of West Des Moines, Iowa. Also, surviving him are seven grandchildren, four great-grandchildren, two nephews, one niece, and many loving and dear friends. Leroy was preceded in death by his parents, his first wife Alvada, his brother Raymond Wymore, his two sisters: Lucille Wymore Webster and Mildred Wymore Chitwood, and two nieces. There will be a private family burial. Langkamp Funeral Chapel & Crematory has been entrusted with Lee's arrangements. For everyone's safety, in the near future, there will be a memorial service held on Zoom. If anyone would like to attend the service, please request the link from [email protected] Memorial contributions can be made to the Mahaska Health Hospice Serenity House.

The family of Leroy Wymore created this Life Tributes page to make it easy to share your memories.

Send flowers to the Wymore family.