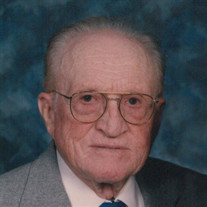 Lewis E. Chilcote, 96, of Oskaloosa passed away Monday morning, October 30, 2017, at Mahaska Health Partnership in Oskaloosa. Lewis Edward Chilcote, son of Perry Edward and Goldie Smith Chilcote, was born September 4, 1921, in Mahaska County, Iowa. He attended Riverside Country School in West Des Moines Township. He joined his father’s trucking business following his education. Lewis enlisted in the Navy on June 26, 1942; that same year, he married Louise Frye and to this union two children were born. While in the Navy, Lewis served as an Aviation Machinist Mate 2nd Class and was stationed in Corpus Christi, TX; he was honorably discharged September 6, 1945. After his discharge, he returned to Oskaloosa where he resumed trucking for his father. After several months of working for his father, Lewis bought his own truck and did general trucking. During this time, Lewis also started farming southwest of Oskaloosa. In 1953, he expanded his farming operation and stopped trucking. On November 1, 1962, he married Gennevieve Winegardner at the Little Brown Church in Nashua, Iowa. In the spring of 1972, he sold his farm and began working for the A.S.C. office; later, he worked for Quad County Grain. In the fall of 1973, he began working for the Oskaloosa Municipal Water Department and retired in August of 1989. Lewis was a 70-year member of the American Legion, a life member of the D.A.V. and a past member of the Eagles Club. Lewis enjoyed farming, trap shooting, coffee time, and spending time with his family. He is survived by his wife, Gennevieve Chilcote; son, Lysle Chilcote of Oskaloosa; daughter and son-in-law, Carol and Stephen Heilman of Broken Arrow, OK; three grandchildren: Jason and his wife, Rosalyn, Heilman of Tulsa, OK; Angela and her husband, Doug, Rexroth of Kirkville, IA and Robyn Hoppman of Riverside, IA and Jeff Hoppman of Washington, IA; seven great-grandchildren; two great-great-granddaughters; and sister-in-law, Lucille Hoyt of Oskaloosa. He was preceded in death by his parents; daughter-in-law, Margaret Chilcote; granddaughter, Mariann Asher; sister and brother-in-law, Phyllis and Marvin Loynachan; sister and brother-in-law, Louise and Bob Hicklin; sister and brother-in-law, Marcella and Gene Dykstra; and brother and sister-in-law, Willis and Mary Chilcote. Funeral Services for Lewis will be held at 10:30 a.m., Thursday, November 2, 2017, at Langkamp Funeral Chapel with Pastor Alvern Boetsma of the Good News Chapel officiating. Burial will be in Forest Cemetery with Military Honors by the Oskaloosa Honor Guard. Visitation will begin at 10 a.m. Wednesday at the funeral chapel. The family will greet friends and relatives from 5-7 p.m. Wednesday evening. Memorials may be made to MHP Hospice Serenity House.

The family of Lewis Edward Chilcote created this Life Tributes page to make it easy to share your memories.

Send flowers to the Chilcote family.