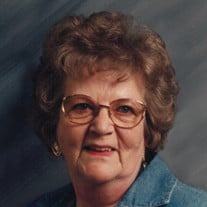 Lila Wolfe, 88, of Oskaloosa passed away Friday evening, January 11, 2019, at the Mahaska Health Hospice Serenity House in Oskaloosa. Lila Coleen Wolfe, daughter of Loren & LaRue (Foster) Buckingham was born March 30, 1930, in Albia, IA. She attended country school near Rose Hill and was a 1947 graduate of Rose Hill High School. On May 20, 1948, she married Lyle Gordon Wolfe in Oskaloosa. While her children were at home, she was a homemaker; she later worked at Jack Spratt Food Store, as a teacher’s aide for special education children in Rose Hill, a bookkeeper for Mobile Gas Station, a receptionist at Family Medical Center, and for Iowa Reality. She retired in 1991. Lila enjoyed oil painting; she crocheted many afghans and enjoyed fishing with her family. She is a member of the Rose Hill Community Church. Lila is survived by her two sons and a daughter-in-law: Randy & Vickie Wolfe of Oskaloosa and Richard Wolfe of Nampa, Idaho; three grandchildren: Lyle, Amanda and Cassidy; a step-grandson, Billy; ten great-grandchildren; and a sister-in-law, Lona McGrew of Oskaloosa. She was preceded in death by her parents, her husband, Lyle on Aug. 9, 1999; two brothers: Ronald & Bill Buckingham; a sister: Dorothy McNabb; and several brothers-in-law and sisters-in-law. Funeral services will be held at 10:30 a.m., Wednesday, January 16, 2019, at Langkamp Funeral Chapel with Rev. Del Bittner officiating. Burial will be in Forest Cemetery. Visitation will begin at 11 a.m., Tuesday at the Funeral Chapel; the family will greet visitors from 4- 6 p.m. Tuesday evening. Memorials may be made to the Rose Hill Community Church or Mahaska Health Hospice Serenity House.

The family of Lila Coleen Wolfe created this Life Tributes page to make it easy to share your memories.

Send flowers to the Wolfe family.