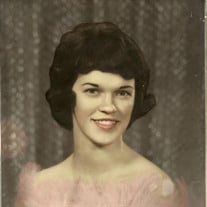 Linda DeJong, 73, of Oskaloosa passed away early Sunday morning, September 30, 2018, at the Mercy Hospice in Johnston, Iowa. Linda Faye DeJong, daughter of Gilbert and Dorothy Beryl (Whitehead) DeJong, was born April 8, 1945, in New Sharon, Iowa. One of seven children raised on the DeJong farm at the edge of New Sharon, she had many fond memories of growing up in small-town rural Iowa. After graduating from New Sharon High School in 1963, she married Gary Richards. To this union three children, Joni, Rodney, and Jan were born. She and Gary later divorced. Linda worked a variety of jobs through the years including as a housekeeper at Wm. Penn University, and lastly as the manager at Inglenook Apartments for the past eight years until her health no longer permitted it. Linda’s passion was motherhood, and she cherished the time she was able to be home with her children. She also thoroughly enjoyed her grandchildren and great-grandchildren. Her family includes her children and their spouses: Joni Jay (Randall) Kelley of Oskaloosa; Jan Heiden of Ankeny, and Monica Reicks of Van Meter; her grandchildren: Brandis (Eric) Baldwin, Bailey (Kevin) Kelley-Korth, Madison (Andrew) Kelley-Berg, Levi Garrison Richards, Ella Sue Heiden, and Adaline Grace Heiden; and great-grandchildren: Kobie Watt and Roman Baldwin. She is also survived by her siblings: Karen Elscott of Midlothian, VA, Twyla (Bob) Septer of New Sharon, and Dick (Betty) DeJong of Waxahachie, TX; a sister-in-law, Diane DeJong of New Sharon; several nieces and nephews; and a special friend, Larry Brand. In addition to her parents, Linda was preceded in death by her son, Rodney Lee Richards; her brother, Dwight DeJong; and her twin sisters: Bonnie Roose and Connie DeJong. Memorial services for Linda will be held at 10:30 a.m., Thursday, October 4, 2018, at Langkamp Funeral Chapel & Crematory with Mr. Randall Kelley officiating. Visitation will begin after noon on Wednesday; the family will greet visitors from 5-7 p.m. Wednesday evening. Memorials can be made to Mercy Hospice in Johnston. Memories and condolences can be sent to the family by visiting langkampfuneralchapel.com.

The family of Linda Faye DeJong created this Life Tributes page to make it easy to share your memories.

Send flowers to the DeJong family.