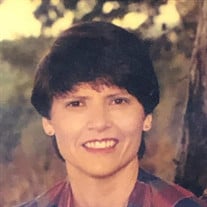 Linda Ray VanderBeek, 76, of Eddyville passed away Sunday, June 21, 2020, at her son’s home near Carlisle, Iowa. Linda VanderBeek, daughter of Raymond and Velma (Walker) Padgett, was born March 13, 1944, in Oskaloosa, Iowa. She grew up on a farm outside of Oskaloosa, where she enjoyed horseback riding, an activity she enjoyed throughout her life. After graduating from Oskaloosa High School in 1962, Linda worked at Stapp’s Drug for a brief time before going to work at the Continental Overall Factory. Linda married Rodney VanderBeek, July 24, 1966, in Oskaloosa. They made their home in Oskaloosa, and she later went to work at Pella Corp. in the shipping department for the remainder of her career. In the late 1970s, Linda and Rodney realized their dream of buying a farm near Eddyville. They enjoyed life in the country – Linda loved mushroom hunting in the spring, camping, horseback riding, and snowmobiling. Linda also enjoyed collecting cookie jars. Her family includes a son, Anthony (Lisa) VanderBeek of Carlisle, IA. She was blessed with three grandsons: Cody (Holley), Trevor, and Tanner VanderBeek and four great-grandchildren: Blade, Madison, Gracey, and Piper VanderBeek. She is also survived by a brother, Rick (Brenda) Padgett of Melcher; a brother-in-law, Dennis Seibert of Harvey; and several nieces, nephews, and cousins. In addition to her parents, Linda was preceded in death by her husband, Rodney, on Dec. 25, 2018; a sister, Caroline Seibert; and a brother and sister-in-law: Randall and Quida Padgett. As was her wish, Linda’s body has been cremated. A Celebration of Life Service will be held at a later date. Langkamp Funeral Chapel & Crematory has been entrusted with her arrangements.

The family of Linda VanderBeek created this Life Tributes page to make it easy to share your memories.

Send flowers to the VanderBeek family.