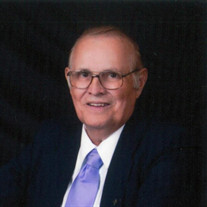 Dr. “Doc” Lloyd Phillips, 86, of Oskaloosa passed away Friday, June 18, 2021, at Unity Point Iowa Methodist Medical Center in Des Moines, Iowa. Dr. Lloyd Keith Phillips, son of T.K. Jay and Gladys Ruth (Neir) Phillips, was born September 1, 1934, in Cherokee, Iowa. Lloyd attended several schools in Iowa due to his father’s occupation as a school superintendent; he was a 1952 graduate of West Union High School. He attended Upper Iowa University for two years and then enlisted in the Army on June 15, 1954, in Des Moines. Lloyd served in the Signal Corps in Japan. He was discharged on March 14, 1956, and then entered the Iowa Army Reserves. Upon his return from the Army, Lloyd married Nancy Marie Ross in Mechanicsville, Iowa. Lloyd continued his education at the Illinois College of Optometry in Chicago, where he was a 1963 graduate. Lloyd and Nancy made their home in Oskaloosa, where Lloyd opened Phillips Optometry. He retired in 2007. Lloyd was a member of the Bethel Baptist Church, the Iowa Optometry Association and the American Optometry Association. He was a member and past president of the Oskaloosa Kiwanis Club, the Human Service Resource Council and the Salvation Army. He also served on the boards of the YMCA, the Board of Adjustment for the City of Oskaloosa, and the Oskaloosa Retirement Center. Lloyd’s family includes a daughter, Lisa Kaye Phillips (Bob Gaffney) of Oskaloosa; sons, Kevin Scott Phillips (Jimmy Platt) of Houston, TX, Kraig Alan (Allison La) Phillips of West Des Moines, and Dr. Aaron (Connie) Phillips of Monroe, WI; six grandchildren: Dakota (Savannah), Makayla, Kira and Brenna, and Zachary and Kobe; a sister, Betty Jean Busching of Arizona; brothers: Kenneth L. (Ann) Phillips of West Des Moines and Raymond A. (Cindy) Phillips of Wyoming; and a sister-in-law, Ruth Ann Fiala of Troy Milles, Iowa. In addition to his parents, he was preceded in death by his wife, Nancy on April 12, 2012, and a daughter, Kelli Ann. Funeral Services will be held at 10:30 a.m., Thursday, June 24, 2021, at the Bethel Baptist Church with Pastor Steve Cox officiating. Burial will be in Forest Cemetery with Military Honors by the Oskaloosa Honor Guard. Visitation will begin at 11 a.m., Wednesday, at Langkamp Funeral Chapel; the family will greet visitors from 4-7 p.m., Wednesday evening. Memorials can be made to the Bethel Baptist Church or to the Oskaloosa Senior Center.

The family of Lloyd Phillips created this Life Tributes page to make it easy to share your memories.

Send flowers to the Phillips family.