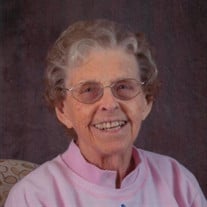 Lois Beaver, 101, of Oskaloosa passed away Monday, May 11, 2020, at the Mahaska Hospice Serenity House in Oskaloosa. Lois Ann Beaver was born on a farm a mile west of Cedar, Iowa, April 4, 1919, to Carl and Ethel (Brubaker) Ferguson. She grew up in the Cedar Community and attended grade school and high school at Cedar Consolidated School at Cedar. She furthered her education at Iowa State Teacher and graduated with an elementary teaching degree. She taught first at Red School in Mahaska County for two years. She went on to teach grade school in Colo, Montezuma, and Knoxville as well. Lois married H. Maurice Beaver, December 25, 1943, at her parent’s home a mile west of Cedar. They farmed on the Beaver home place for five years before moving to Ames, Iowa, and attending Iowa State College. There she received a B.S. degree and lived for a short time in Cobin Home Management House. The Beaver’s then moved to Adel, Iowa, where Maurice was Farm Bureau field man, and Lois taught second grade. After two years in 1951, they moved back to the home farm. Lois took more course work at the University of Iowa before teaching English and Home Economics in high school in Fremont, Iowa. Later, she did substitute teaching at Fremont, Eddyville, and Blakesburg. In October 1953, Susan Kay and Margaret Ann “Midge” joined the family. Late, Susan died while swimming with the M.Y.F. group in Oskaloosa. On June 8, 1960, Michael Lee and Janice Marie joined Midge in the family circle. Lois did all aspects of fieldwork on the farm. Everything from preparing the soil for spring planting to running the combine during corn and soybean harvest. Lois enjoyed 4-H starting as a youngster and continuing throughout most of her life. In 1936, she served as a Mahaska County Girl’s 4-H President. After ten years as a 4-H leader, she was chairman of the Mahaska Girl’s 4-H Club Committee. In 1955, she received the 4-H State Alumni Recognition Award at Ames, Iowa. After moving back to the farm, Lois was active in church and community activities. Her skills learned in 4-H served her well in the offices she accepted in P.E.O Chapter I.O., King’s Daughters, Mahaska County Family and Consumer Science Club, Church Credo Coterie Circle, the neighborhood 5:45 Club and several years on Friends of the Oskaloosa Public Library Committee. In 1985, Lois and Maurice left the farm and moved into their Terrace Drive home in Oskaloosa. She stayed in her home until August 2015, when she moved to Homestead Assisted Living, a place she truly loved. Those left to honor Lois’ memory are her two daughters: Margaret “Midge” (George) Stonecipher of Youngsville, LA and Janice (Chris) Hoover of Oakland, MO; a son, Michael (Vanessa) Beaver of Phoenix, AZ; four grandchildren: Amy (Romy) Andaya of Carencro, LA, Todd (Carol) Stonecipher of Lafayette, LA, Phillip (Rachel) Stonecipher of Denver, CO, and Angela Glosser of Nevada, MO; two great-grandchildren: Bryce and Quinn Stonecipher; and a brother, Homer Ferguson of Oskaloosa. In addition to her parents and her husband, H. Maurice Beaver, October 15, 2012; Lois was preceded in death by her daughter, Susan Kay Beaver, August 4, 1968; and three brothers and their wives: Loel (Mary) Ferguson, Dr. Max (Berneice) Ferguson, and Gene (Frances) Ferguson. Funeral services for Lois will be held at 10:30 a.m., Friday, May 15, 2020, at Central United Methodist Church with Rev. Bruce Wittern officiating. Due to Covid-19 restrictions, social distancing will be practiced at the church. Burial will be in Forest Cemetery. Langkamp Funeral Chapel has been entrusted with the arrangements. Memorial contributions can be made to P.E.O. Star Scholarship.

Lois Beaver, 101, of Oskaloosa passed away Monday, May 11, 2020, at the Mahaska Hospice Serenity House in Oskaloosa. Lois Ann Beaver was born on a farm a mile west of Cedar, Iowa, April 4, 1919, to Carl and Ethel (Brubaker) Ferguson. She grew... View Obituary & Service Information

The family of Lois Beaver created this Life Tributes page to make it easy to share your memories.

Send flowers to the Beaver family.