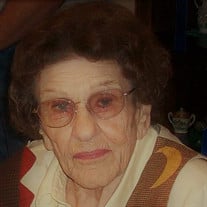 Lois Tarr, 98, of Oskaloosa passed away Tuesday, March 6, 2018, at Northern Mahaska Specialty Care in Oskaloosa. Lois Pauline Tarr, daughter of Frank Harold and Annis Rebecca (Dunsmoor) Hull was born October 26, 1919, near Oskaloosa, IA. She was a 1937 graduate of New Sharon High School. She married Homer Tarr January 12, 1941, in Oskaloosa. Together, they lived and raised their family in Oskaloosa. Lois worked for several years at Wm. Penn College and Oskaloosa High School Food Services. Lois was a member of the American Legion Auxiliary, the D.A.V., and the First Christian Church, where she was active in the craft club and DWF-Esther Circle. Lois enjoyed baking for her family and friends; she also had a special place in her heart for small children Lois is survived by her daughters: Judy and her husband, Dennis Johnson of Clearwater, FL, and Mary Tarr of Des Moines, IA; her grandchildren: Denise and her husband, Ted Beil and Eric Johnson, all of Clearwater, FL; her great-grandchildren: Matthew Beil and his wife, Amanda and Alexandra Beil; a sister, Phyllis Clayworth and sister- in- law Marjorie Hull of New Sharon, IA. She was preceded in death by her parents, her husband, Homer and two brothers, Raymond and Lester Hull and his wife, Joyce; a sister, Ila Mattix; and two brothers-in-law, Charles Mattix and Dale Clayworth. A funeral service for Lois will be held at 10:30 a.m., Wednesday, March 14, 2018, at Langkamp Funeral Chapel with Rev. Robert Goodrich of the First Christian Church officiating. Burial will be in Forest Cemetery. Visitation will begin after 10 a.m., Tuesday at the funeral chapel; the family will greet visitors from 4-6 p.m., Tuesday evening. Memorials may be made to the First Christian Church.

The family of Lois Pauline Tarr created this Life Tributes page to make it easy to share your memories.

Send flowers to the Tarr family.