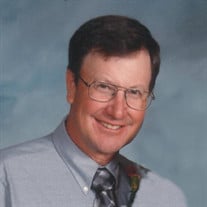 Loren Van Zante, 69, of Eddyville, passed away Wednesday, October 6, 2021, at the Mahaska Hospital in Oskaloosa. Loren Eugene Van Zante, son of Elmer and Elizabeth (Van Heukelom) Van Zante, was born April 29, 1952, in Oskaloosa. He was raised on the Family Century Farm near Eddyville. Growing up, he followed his father and older brother everywhere on the farm, and it was during that time, farming indeed became his identity. While still in high school, Loren started a farrowing operation on his father’s farm, and shortly after graduating from Eddyville High School in 1970, he purchased a nearby farm. He married the love of his life, Rhonda Hightower, on August 24, 1975, at the Beacon United Methodist Church. In 1977, he and Rhonda purchased the family farm they have operated to this day. Loren loved the challenge of raising livestock and watching his animals grow and thrive. His son, Joshua, was raised just as he was, and when old enough, he joined his father tending the land and raising livestock. Loren never lost the strong faith nurtured in him from childhood and truly trusted God to meet all his needs. He had a very special bond with his grandchildren, they loved visiting the farm and playing croquet, and grandpa loved making them laugh. His family includes his wife, Rhonda of Eddyville, his children and their spouses: Joshua (Amanda) Van Zante of Eddyville and Kristin (Brian) Borcherding of Hampton, IA; his grandchildren: Caleb and Sarah Van Zante and Ellie, Lucas, Andrew & Noelle Borcherding; a brother, Arlin (Donna) Van Zante of Eddyville; a sister, Beth (Randy) Brostrom of Oskaloosa; and several nieces and nephews. Loren was preceded in death by his parents. Graveside funeral services for Loren will be held at 11 a.m., Monday, October 11, 2021, at Columbia Cemetery near Eddyville, with Pastor Mark Hornback of the First Church of the Open Bible in Ottumwa officiating. Visitation will be held from 11 a.m. to 7 p.m., Sunday at Langkamp Funeral Chapel. Memorials can be made to the family and will be designated at a later time.

The family of Loren Van Zante created this Life Tributes page to make it easy to share your memories.