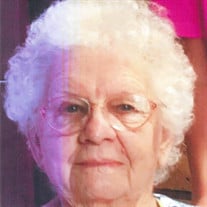 Louise Heaton, 92, of Oskaloosa passed away February 4, 2019, at Mahaska Hospice Serenity House in Oskaloosa. Louise Heaton was born in Oskaloosa on September 24, 1926, to Albert and Bertha (Wassenhove) Moffet. She grew up on a farm south of Oskaloosa with four brothers and three sisters. Louise attended elementary school at Elm Grove Country School and graduated from Oskaloosa High School. On April 4, 1947, she married Charles “Chuck” Leroy Heaton. Chuck and Louise owned and operated Heaton Service Center for several years before retiring and moving to their home on Edmundson Drive. They enjoyed more than 25 winters in Arizona until Chuck’s health deteriorated. Chuck passed away April 3, 2008. Shortly after that, Louise moved to Homestead Assisted Living where she lived for seven years. She later moved to Northern Mahaska Nursing and Rehab Center. Louise’s family includes two children: Linda Kay Heaton (Bill) Binns of Oskaloosa and Carl Lee (Kerry) Heaton of Minnesota; six grandchildren: Steve (Kendra) Heaton of Oskaloosa, Cara Heaton of Oskaloosa, C.J. (Jessica) Heaton of Nebraska, Katie Heaton Kilburg of Minnesota, Sarah Binns (Quintin) Shepherd of Texas and Owen Binns of Ankeny; fourteen great-grandchildren along with seven great-great-grandchildren. She is preceded in death by her brother, two sisters, and a great-grandson. Graveside funeral service for Louise will be held at 11:15 a.m., Saturday, February 9, 2019, in Forest Cemetery. The cemetery’s North 11th Street entrance should be used when attending the service. Visitation will be held from 10 a.m. to 6 p.m., Friday at Langkamp Funeral Chapel; the family will greet visitors from 10-11 a.m., Saturday morning, after which time a procession will form to travel to the cemetery. Instead of flowers, memorials can be made to Mahaska County Hospice or the Alzheimer’s Assn.

Louise Heaton, 92, of Oskaloosa passed away February 4, 2019, at Mahaska Hospice Serenity House in Oskaloosa. Louise Heaton was born in Oskaloosa on September 24, 1926, to Albert and Bertha (Wassenhove) Moffet. She grew up on a farm south of... View Obituary & Service Information

The family of Louise Heaton created this Life Tributes page to make it easy to share your memories.

Send flowers to the Heaton family.