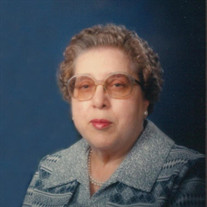 Lucile Gravitt, 99, of Oskaloosa, passed away Saturday, November 28, 2020, at Grinnell Health Care in Grinnell, Iowa. Lucile Ione Gravitt, daughter of Asa Dolittle and Myrtle Adel (Newton) Whitlock, was born November 4, 1921, in Oskaloosa. She attended Oskaloosa Schools. Lucile married Walter Linzy Gravitt on July 17, 1937. Walter and Lucile moved to California, where they worked in Civil Service in 1941 and returned to Oskaloosa in 1945. Lucile worked at the Big Smith Overall Factory for 30 years as a seamstress specializing in pockets. Lucille was a 50 plus year member of the First Christian Church and a past member of Christian Women’s Fellowship, Esther Circle. She was also a member of the Jolly Girls Club. In her spare time, she enjoyed reading, traveling, history, and hosting family gatherings. Lucile’s family includes her daughter, Linda Edwards of Oskaloosa; six grandchildren: David Edwards, Scott Edwards, Robert Jr. (Connie) Edwards, Shelly Ann Edwards, Vincent Provenzano, and Raymond Provenzano; 11 great-grandchildren; seven great-great-grandchildren; a great-niece, Glory Pothoven; and five great-great-nieces and nephews. In addition to her parents, Lucile was preceded in death by her husband, Walter, in 2011, after 73 years of marriage. She was also preceded in death by her daughter, Diana Provenzano; her granddaughter, Valerie Provenzano; a brother, George Whitlock; four sisters: Ida Martin, Frances Church, Adelya McMullen, and Gloria Ballou; two nieces, Dixie Scull and Lonnie Ballou; and a great-niece, Tina Anderson. Private Funeral service for Lucile will be held Wednesday, and burial will be in Forest Cemetery. Open visitation will be held from noon to 6 p.m., with no family present, Tuesday, December 1, 2020, at Langkamp Funeral Chapel. According to the rules put in place by the Iowa Department of Public Health, proper social distancing and masks are required for attending this public event. The service will be available to view on the Langkamp Funeral Chapel’s YouTube channel Wednesday evening for those unable to attend the ceremony. Memorial contributions can be made to UnityPoint Hospice in Grinnell or the Alzheimer’s Association.

The family of Lucile Gravitt created this Life Tributes page to make it easy to share your memories.

Send flowers to the Gravitt family.