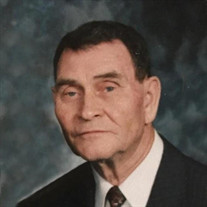 LuVerne “Bun” Braden, 89, of Oskaloosa passed away Wednesday, September 30, 2020, at Mahaska Health in Oskaloosa. LuVerne Archie Braden, son of Archie and Rosa (Lockard) Braden, was born April 24, 1931, at the rural home of his parents in Pleasant Grove Township near Barnes City, Iowa. The family moved to Oskaloosa when he was a child, and he was a 1950 graduate of the Oskaloosa High School. Following his education, he entered the Marine Corps and served in active duty until 1952, and served in the Marine Reserves until April 25, 1960. LuVerne was united in marriage to Patsy Ann Whipple on August 10, 1952, in Oskaloosa. He worked at Maytag in Newton for eight years before moving to Marion, Iowa, where he worked with Sears & Roebuck Company. He worked at Sears for 17 years and returned to Oskaloosa in 1976. He was then hired by Pella Corp and worked for them another 17 years, retiring in 1993. In his free time, LuVerne enjoyed fishing and doting on his grandchildren. He was a long-time member of the First Assembly of God Church in Oskaloosa, where he served as a church board member, taught Sunday School, and served on the mission board. He was a gentle and faithful man, beloved by all who knew him. His family includes his sons: Greg “Butch” (Deb) Braden of Oskaloosa, and Jeffrey (Roxanne) Braden of Marion, Iowa; ten grandchildren: Shannon (Carl) Gausman, Jeremy (Joie) Braden, Ryan (Jesse) Goemaat, Amy (Shannon) Garringer, Eric (Nikki) Braden, Dustin (Harmony) Braden, Nicole Vander Veer, T.J. (Karen) Latcham, Lyndsay Brennon and Miranda Brennon; 20 great-grandchildren and one great-great-granddaughter. In addition to his parents and his beloved wife, Patsy of 64 years, LuVerne was preceded in death by an infant daughter, Jo Dea; two brothers: Donald and Leon Braden, and two sisters: Pauline Walker and Darlene Sams; his mother-in-law and father-in-law, Larry and Connie Whipple; a great-great-grandson, Ruger Goemaat. As was his wish, LuVerne’s body has been cremated. A memorial will be held at 10:30 a.m., Saturday, October 3, 2020, at the First Assembly of God Church in Oskaloosa with Reverend Mike Dotson officiating. This service can be viewed remotely by going to First Assembly of God, Oskaloosa on Facebook. Burial will be at Hamilton Cemetery near Bussey, Iowa. Military honors will be presented by the Oskaloosa Honor Guard. The family will greet visitors from 9:30 a.m. to service time Saturday morning. According to the rules put in place by the Iowa Department of Public Health, proper social distancing and appropriate personal protective equipment are advised for attending this public event. Memorials contributions can be made to the family. Langkamp Funeral Chapel & Crematory are handling LuVerne’s final arrangements.

The family of LuVerne Braden created this Life Tributes page to make it easy to share your memories.

Send flowers to the Braden family.