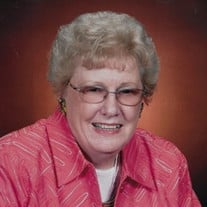 Jean Browneller, 97, of Oskaloosa passed away early Monday morning, October 2, 2017, at the MHP Hospice Serenity House in Oskaloosa.   Martha Jean Browneller, daughter of Homer L. and Irma Belle Havener Nicholson, was born, September 16, 1920, in Oskaloosa, Iowa.   She was a 1938 graduate of Oskaloosa High School and then worked as a telephone operator for Northwestern Bell. Jean married Max C. Browneller, September 18, 1940, at the Central United Methodist Church in Oskaloosa. Together they made their home on a farm in the Spring Valley area, Monroe Township in Mahaska County. They worked together on the farm for 40 years, before moving to Oskaloosa in 1980. Jean was very involved in 4-H. As a youngster, she was a member for nine years, and the last year, she was president of the county and attended the state convention in Ames. She went on to serve as a club leader for two years and then on the county committee for 10 years. She was chairman one year. Jean’s interest in youth prompted her to help organize Rural Youth Club and later Young Married Club in Mahaska County. Max raised sheep on their farm, and Jean took an interest in the wool that was produced. She helped organize the “Make It With Wool” contest in Iowa and was district director for many years. Jean was a member of Central United Methodist Church and Farm Bureau.   Jean’s family includes a brother and sister-in-law, John and Donna Nicholson of Oskaloosa; four nephews and their spouses: Dean and Mary Brooks of West Des Moines, Jeffrey Nicholson of Oskaloosa, Mark and Diane Nicholson of Oskaloosa, and Jay and Ann Nicholson of Montezuma; three great-nieces: Laura Nicholson of Oskaloosa, Stephanie Nicholson (fiancée, Billy Nefzger) of Cedar Rapids and Sydney Nicholson of Montezuma; and three great-nephews: Dan Brooks of Montana; Michael Brooks of Washington, D.C. and Steven Nicholson of Montezuma.   Besides her parents, Jean was preceded in death by her husband, Max on May 10, 2001, and two sisters, Lou Drane and Betty Brooks.   Funeral Services will be held at 10:30 a.m., Wednesday, October 4, 2017, at Langkamp Funeral Chapel with Rev. Bruce Wittern of Central United Methodist Church officiating. Burial will be in Forest Cemetery. Visitation will begin at 10 a.m., Tuesday at the funeral chapel; the family will greet visitors from 5-7 p.m. Memorials can be made to the MHP Hospice Serenity House in Oskaloosa. Memories and condolences can be sent to the family by visiting the online guestbook at gvlfuneralchapel.com.

The family of M. Jean Browneller created this Life Tributes page to make it easy to share your memories.

Send flowers to the Browneller family.