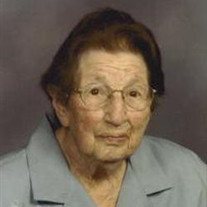 Marcella Valberga Durian: Marcella passed away early Saturday morning, July 31, 2004 at the New Sharon Care Center at the age of 91 years, 4 months and 9 days. Marcella's memory is honored by her ten children and their spouses: Bill & Jan Durian of Oskaloosa; Fred & Sue Durian of Iowa City, IA; Nick & Arlene Durian of Oskaloosa; Duane Durian of Ottumwa; Jerry and Diane Durian of Albia, IA; Joe and Sue Durian of Oskaloosa; Jim and Val Durian of Oskaloosa; Rosemary Humphreys of Lewisburg, WV; Mary Ellen and Jerry Jones of Muscatine, IA; and Celeste and Kim Croskrey of Blakesburg, IA. She was blessed with 25 grandchildren and 28 great grandchildren. She is survived by two brothers: Omer Flander of Minden, Nevada and David Fladung of Washington, IA; two sisters: Bertha Gretter of Harper, IA and Dorothy Sisk of Chersterfield, MO and several nieces and nephews. Marcella Valberga Durian, daughter of William and Clara Greiner Flanders was born on March 22, 1913 near Harper in Keokuk County, IA. She began her education at a country school in Keokuk County, she attended one year of school in Washington, IA and then attended a Catholic boarding school in Davenport, IA. Following her education, she cared for her uncle and aunt in Keota, IA. She married Richard T. Durian in Keota on June 5, 1935. They farmed near Packwood and Wellman, until 1961, when they moved to Oskaloosa. At that time Marcella began working at the Continental Overhaul Factory. Later she worked as a cook at the St. Mary's Catholic School in Oskaloosa and then at Wm. Penn College Cafeteria, until her retirement in 1985. Richard passed away on May 28, 1985, after almost 50 years of marriage. Marcella was a member of the St. Mary's Catholic Church and a past member of its Altar and Rosary Society. Marcella loved to crotchet; she made baby caps for all infants born at Mahaska Hospital from 1985 to 2001 and will always be remembered by the numerous items given to her family. Marcella also enjoyed gardening; she always had a large garden, from which she enjoyed feeding her family and friends. Marcella was preceded in death by her parents; her husband; a son-in-law, Mark Humphreys; a daughter-in-law, Jolleen Durian; and one brother, Donald Richard Fladung, who died during the WWII. PDF Printable Version

The family of Marcella Valberga Durian created this Life Tributes page to make it easy to share your memories.

Send flowers to the Durian family.