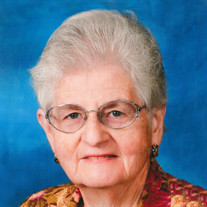 Margaret Ademeit, 77, of Oskaloosa passed away Tuesday, April 16, 2019, at Northern Mahaska Specialty Care Center. Margaret Lou Ademeit was born October 24, 1941, at Oskaloosa to Louie Calvin and Letha Margaret (Cashatt) Ademeit. She accepted Christ as her personal Savior at the Beacon Methodist Church in 1948. Margaret attended Beacon School and graduated from Oskaloosa High School in 1960. She began her banking career at Northwest Des Moines National Bank in 1961. She married Henry Ehrle, April 1966, and they were divorced in 1982. Margaret and Henry lived in Cedar Rapids, Iowa, where she worked for 16 years as a Data Processing Manager at Bohemian Savings Bank. In 1984 she moved to Chariton where she was a Vice-President and Assistant Trust Officer. IN 1994, she and her father moved to Oskaloosa and semi-retired, working at Bank Iowa. Margaret enjoyed working on family genealogy and researching Beacon and area coal mining history. She was a member of the Keomah Genealogical Society and was truly a treasure trove of information. She was skilled typist and data processor, recording well over 100 years of funeral records from Langkamp Funeral Chapel into a large searchable binder. She loved to travel with friends or sometimes by herself. Margaret enjoyed country music and was the Iowa representative for the Bill Anderson Fan Club for several years. She made several trips to Nashville and Branson MO was another favorite place for her to visit. Margaret had a genuine love of her country and very much appreciated veterans, she was quick to share a sincere “Thank You” to any veteran she encountered. She also enjoyed going to breakfast with friends and coffee time with church friends on Tuesdays. She loved her nieces and nephew and their families and treated them as they were her own, playing games with them and taking them shopping. She is survived by a brother and sister-in-law, Calvin Lee and Janet Marie Ademeit of Oskaloosa; two nieces: Donna (Matt) Budd of Altoona, and Lisa (Alan) Coffman of Indianola, and a nephew, David (Tracy) Ademeit of Lacona; ten great-nieces and nephews; four great-great-nieces and nephews; an aunt Betty Downer of Longmont CO; and several cousins. Margaret was preceded in death by her parents. Funeral services for Margaret will be held at 11 a.m., Friday morning, April 19, 2019, at the Bethel Baptist Church in Oskaloosa with Rev. Steve Cox officiating. Burial will be in Tioga Cemetery. Visitation will begin at 10 a.m., Thursday, at Langkamp Funeral Chapel. The family will greet visitors from 5-7 p.m., Thursday evening. Memorials can be made to Bethel Baptist Church or Care Initiatives Hospice.

The family of Margaret Ademeit created this Life Tributes page to make it easy to share your memories.

Send flowers to the Ademeit family.