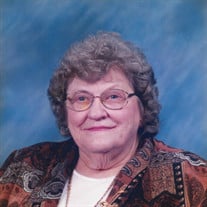 Margaret Dickerson, 94, of Oskaloosa, passed away Friday evening, February 28, 2020, at Crystal Heights Care Center in Oskaloosa. Margaret Grace Dickerson, daughter of Benart “Ben” and Laura Olivia Brown Kooi, was born July 6, 1925, in Hawarden, Iowa. Margaret attended country school near Hawarden, in Sioux County, through the eighth grade. At age 18, her parents moved to Pella, Iowa, and she began working at the Pella Co-op grocery store and later at the Big Smith Overall Factory. Margaret married in 1949; they made their home in Oskaloosa, and three children were born to this union. She later divorced. On July 6, 1953, Margaret married Lloyd Dickerson; together they raised seven children as their own. When her children were older, Margaret went back to work at the Continental Overall Factory in Oskaloosa where she worked ten years. She then worked a J.R.’s Maid-Rite in the Atpic Mall for three years and eventually provided child care in her home until her retirement at age 70. Margaret was a long time member of the Oskaloosa First Assembly of God and the O.K. (Older Kids) Bunch at the church. She was a fabulous baker of pies, bread, and cinnamon rolls; she enjoyed all types of sewing. Margaret was definitely the matriarch of the family and the heart of her home: she loved her children fiercely and unconditionally, emphasizing a strong work ethic and an unwavering trust in God’s plan for each of their lives. Her home was a refuge not only to her family but to the many friends her children brought with them. She was very straight-forward with her opinions – sharing her views on how things could be improved. Margaret’s faith was the foundation of all she did, and she will be remembered as a wonderful mother and grandmother. Margaret’s family includes Larry Dickerson of Oskaloosa; Shirley and Phil Owens of Oskaloosa, Vernon Bunnell of Oskaloosa, Lavonne and Dale Witzenburg of Oskaloosa and Kenneth and Deb Dickerson of Des Moines,; 29 grandchildren; 40 great-grandchildren; 24 great-great-grandchildren; two sisters: Joyce Van Wyk of Pella, and Florence Blom of Ellisville, Mississippi. Besides her parents, Margaret was preceded in death by her husband, Lloyd; two sons: Dennis Bunnell and Keith Dickerson; two daughters-in-law: Jennifer Dickerson and Diane Bunnell; two grandsons: Dale Witzenburg and Eric Dickerson; a great-grandchild, Zachary McDonald; brothers: Lewis and Earl Kooi, and two sisters: Esther Vander Plaas and Ruth Kooi. Funeral Services for Margaret will be held at 10:30 a.m., Wednesday, March 4, 2020, at the First Assembly of God Church with Rev. Michael Dotson officiating. Burial will be in Forest Cemetery. Visitation will begin at 11 a.m., Tuesday, at Langkamp Funeral Chapel; the family will greet visitors from 5-7 p.m., Tuesday evening. Memorial contributions can be made to the Student Ministries at First Assembly of God Church.

The family of Margaret Grace Dickerson created this Life Tributes page to make it easy to share your memories.