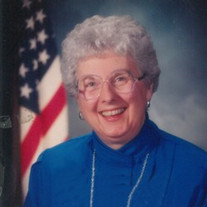 Margie Black, 87, of Oskaloosa passed away Sunday, October 15, 2017, at the Mahaska Health Partnership in Oskaloosa. Margie Ione Black, daughter of Arley and Thelma Irene (Mitchell) Garrett, was born July 22, 1930, in Oskaloosa, Iowa. She was a 1948 graduate of Oskaloosa High School.  August 4, 1950, she was united in marriage to Fred Black Jr. at the First Christian Church in Oskaloosa.  Margie was first employed at the Oskaloosa Herald and later worked for Garden and Associates for ten years.  Her last job was with the Phil Griffin Insurance Agency. She was a longtime active member and volunteer at the First Baptist Church, the American Legion Auxiliary, and the Nelson Pioneer Farm.  Margie had a servant’s heart and truly enjoyed helping others; she also volunteered for many years at the V.A. Hospital in Knoxville, Iowa.  Her family includes her godson, Aaron Lafrenz of Pleasant Hill, Iowa; her siblings and their spouses: Elaine and Danny Brown of Oskaloosa, Mary Lou and Carrol Beyer of Sully, and Betty Plate of Pella. She is also survived by three sisters-in-law: Nancy Garrett of Bussey, Nadine Garrett of Marion, and Miladean Garrett of Albia; and numerous nieces and nephews. In addition to her husband, Fred, of 54 years and her parents, she was preceded in death by four brothers: Bill, Bob, Keith, and Donald Garrett; two sisters: Dorothy Hazlett and Faye Arlene Salway; three brothers-in-law: Bob Plate, Gene Black, Dale Hazlett; and a sister-in-law, Marian Gaston Sperry. Funeral Services will be held at 10:30 Wednesday, October 18, 2017, at Langkamp Funeral Chapel in Oskaloosa with Pastor Alvern Boetsma of the Good News Chapel officiating. Burial will be in Forest Cemetery.  Visitation will begin at 11 a.m., Tuesday, at the funeral chapel; the family will greet visitors from 5-7 p.m., Tuesday evening.  Memorials can be made to the American Legion Auxiliary.

The family of Margie Ione Black created this Life Tributes page to make it easy to share your memories.

Send flowers to the Black family.