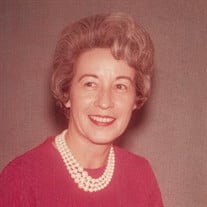 Marie Brock 97, of Oskaloosa, passed away Thursday night, October 4, 2018, at Crystal Heights Care Center in Oskaloosa. Agnes Marie Brock, daughter of Herman E. and Edith (White) Spurgeon, was born August 9, 1921, at the rural home of her parents in Fabius Township in Davis County, Iowa. She attended country school near her home and went on to graduate with the class of 1939 from Bloomfield High School. She married Max E. Howk in 1941 in Ottumwa. They first made their home in Ottumwa where Marie worked for John Morrell. After moving to Oskaloosa, she worked at C.L. Barnhouse Music Company for 18 years, and she was last employed as a realtor associate with Gatton Realty until her retirement. Marie and Max were the parents of one daughter, Conni Jo. They later divorced. She married Robert F. Brock December 31, 1960. Marie was baptized at the First Baptist Church in Oskaloosa as a young woman, and she also attended the First Presbyterian Church. She enjoyed crocheting, and her family was the recipients of many afghans. She also enjoyed computers, crossword puzzles, and watching NASCAR races. Marie’s pets were an important part of her life; memorial contributions should be made to Forest Cemetery for the Pet Resting Place at the cemetery. Marie remained in her own home until less than a week prior to her death. Her family includes her daughter, Conni Jo (Charles “Fred”) Helmick of Oskaloosa; a grandson, Rob Helmick, also of Oskaloosa; a sister, Hilda Elaine of Floris and Harold E. (Lucille) Spurgeon of Ottumwa. In addition to her parents and her husband, Bob on April 15, 1991, Marie was preceded in death by sisters: Etta LaRue (Bob) Harvey and an infant sister, Helen Eva; and a brother, Ralph E. (Marie) Spurgeon. Funeral Services will be held at 10 a.m., Friday, October 12, 2018, at Langkamp Funeral Chapel in Oskaloosa with Pastor Alvern Boetsma of the Good News Chapel officiating. Burial will be in Forest Cemetery. Memories and condolences can be sent to the family by visiting langkampfuneralchapel.com.

The family of Marie Brock created this Life Tributes page to make it easy to share your memories.

Send flowers to the Brock family.