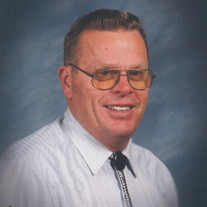 Marion Gray, 80, of Oskaloosa passed away and entered his eternal rest Wednesday, September 23, 2020, at the Mahaska Health Hospice Serenity House. Marion Eugene Gray, son of Alfred Clinton and Lena (Van Roekel) Gray, was born on February 20, 1940, at the rural home of his parents in Mahaska County. He attended school through the 10th grade in Oskaloosa, at which time his parents moved to Loveland, Colorado. After finishing his education, he worked for a farmer for several years and then was hired by the Kodak Film Company in Windsor, Colorado. He worked as a film cutter until his retirement in 1995. Marion married Darlene DeJong and to this union, three daughters were born. They later divorced. On May 24, 1980, he married Ellen Louise Richards in Longmont, Colorado. They lived in Colorado until 2002 when they moved to Oskaloosa. Marion has a passion for John Deere tractor memorabilia and farming; he enjoyed many days helping his farmer friends upon returning to Oskaloosa. He also enjoyed latch-work crafts and morning coffee with friends at McDonald's. Marion was a member of the Omega Church. His family includes his wife, Ellen Gray of Oskaloosa; his daughters: Mary Ann Velasquez (Mike Muransky) of Pierce, Colorado; Linda Weaver (Rex Fuhrmann) of Greeley, Colorado, and Kathy Morrow of Addison, Alabama; seven grandchildren: Bobby and Tommy Velasquez, Marcie Montoya, Austin McCord, and Cody, Dakota and Lisa Mote; two step-grandsons: Monte and Marty Weaver; and numerous great-grandchildren; a sister-in-law: Nancy (Richard) Wakefield of McPherson, Kansas; a sister-in-law, Donna Gray of Denver, Colorado; and a brother-in-law, Irwin "Rip" (Candy) Richards of Elk Point, South Dakota. In addition to his parents, Marion was preceded in death by a sister, Mary Virginia Gray, and his brothers: Aaron Henry Gray and Ervin Allen (Judy) Gray. Private Family Funeral Services will be held at Langkamp Funeral Chapel. Burial will be in Weldon Cemetery. Visitation will begin at 11 a.m., Monday, September 28, 2020, at Langkamp Funeral Chapel; the family will greet visitors from 5-7 p.m. The family requests all those who attend the visitation to please wear a mask. Memorial contribution should be directed to Omega Church or the Mahaska Health Serenity House.

The family of Marion E. Gray created this Life Tributes page to make it easy to share your memories.

Marion Gray, 80, of Oskaloosa passed away and entered his eternal...

Send flowers to the Gray family.