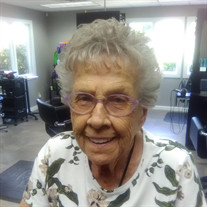 Marjorie England, 93, of Oskaloosa, passed away Wednesday evening, October 2, 2019, at her home in Oskaloosa. Marjorie Arlene Bowers McClun England was born May 14, 1926, in Belle Center, Ohio, to John Furman and Lena Gertrude Jewell Bowers. She was known to family and friends as “Marge.” She was a 1944 graduate of Lodi, Ohio High School. She continued her education at Oberlin School of Commerce and met her husband, Frank G. McClun, while there. Marge married Frank G. McClun, April 14, 1946, in Lodi, Ohio. Following her graduation, Marge worked as a secretary for Oberlin College for two years. After Frank’s discharge from the military, they moved to Iowa City, Iowa, where Frank continued his education. After his graduation in 1957, a job brought Marge and Frank to Oskaloosa, where they made their home. Marge was a homemaker while her children were young; after the children were in school, she began working as a secretary for Dick Wilke Insurance. Later, she worked as a social worker and substitute teacher for Head Start for four years. She then served as director for Mahaska County Relief, a position she held for thirteen years; retiring in May 1988. Shortly after her retirement, she accepted a job with the Mahaska County Sheriff’s Department as a jail matron and a female transfer agent; she retired from the sheriff’s department in 1995. Frank passed away on August 9, 1993. Marge married George A. England on December 12, 1998 in Oskaloosa. Marge was an active member of the American Legion Auxiliary, where she served three years as unit president; she served as the Fifth District President for one year. She served as secretary on the Mahaska County Outreach Board for many years and as treasurer for the Human Resource Council for many years. She was most honored to be part of the Resource Council’s Christmas Food Basket project for several years. She was a lifetime member of Beta Sigma Phi International Society, where she served as an officer for several years. Marge also served as president for the Mahaska Hospital Auxiliary, worked in the hospital snack bar, and volunteered more than 500 hours in the V.A. Hospital clothing room. Her exceptional commitment to volunteerism in Mahaska County was honored by Governor Brandstad with her 1990 induction into the Iowa Volunteer Hall of Fame. Marge was also a member of the Central United Methodist Church. Marge enjoyed camping, reading, crocheting, and quilting for family members, flower gardening, caring for her cats and dogs, wintering in Texas, and spending time with family and friends. Marge is survived by a daughter, JoDee (Loren) VanKooten of Oskaloosa, IA; three sons: John (Bonnie) McClun of Lancaster, PA; Gary (Deb) McClun of Fremont, IA; and Nick McClun of Smithville, MO; a step-daughter, Sandy Laffoon of Adel, IA; 12 grandchildren; 5 step-grandchildren; and numerous great-grandchildren and step-great-grandchildren. Marge was preceded in death by her parents; her husbands, Frank and George; a son, Jeff McClun; a brother, John Bowers; and two infant brothers. Funeral Service for Marge will be held at 10:30 a.m., Monday, October 7, 2019, at Langkamp Funeral Chapel with Pastor Alvern Boetsma officiating. Burial will be in Forest Cemetery. Visitation will be held from 11 a.m. – 5 p.m., Sunday, at the funeral chapel; the family will greet visitors from 9:30 to service time on Monday morning. Memorial contributions can be made to Stephen Memorial Animal Shelter or Mahaska Health Hospice Serenity House.

The family of Marjorie England created this Life Tributes page to make it easy to share your memories.

Send flowers to the England family.