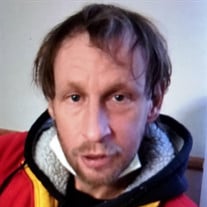 Martin “Marty” Allen Almond, 46, of Oskaloosa passed away unexpectedly Sunday, August 5, 2018, at Mahaska Health Partnership in Oskaloosa. Martin Allen Almond, son of Manford LeRoy and Janetta (Pelong) Almond, was born May 11, 1972, in Oskaloosa, Iowa. Marty attended Oskaloosa Schools and was a member of the class of 1990. As a young man he started a lawn mowing business. He later was employed with Pella Corp. where he worked in door construction and continued to maintain his lawn mowing business, serving over 30 customers. He later worked for T.J.A. Construction, assisting with residential remodeling. His most recent employment was with the Riverside Restaurant. Marty was a hard worker, often starting before sunrise and ending after sunset. His hobbies included racing, derbies, building old classic car models, fishing and boating on the river. He enjoyed spending time with his family, especially his granddaughter, Lilah. His family includes his children Kyle (Chrissy) Almond and their daughter, Lilah, of Oskaloosa; Dillen Almond of University Park; a sister, Carmen (John) Pearson of Rose Hill, IA; brothers: James Almond of Coralville and Mark (June) Almond of Oskaloosa; mother Janetta Almond of Rose Hill; and many nieces and nephews. In addition to his father, Marty was preceded in death by his best friend, Jeff Durst. Funeral services for Marty will be held at 11 a.m., Wednesday, August 8, 2018, at Langkamp Funeral Chapel in Oskaloosa. Burial will be in Westview Cemetery in Kirkville, Iowa. Visitation will be held from 9:30 a.m. to service time on Wednesday morning. Memorials can be made to his family.

The family of Martin "Marty" Almond created this Life Tributes page to make it easy to share your memories.

Send flowers to the Almond family.