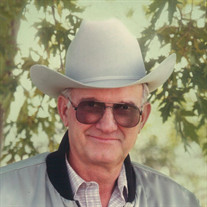 Marvin E. Molyneux, 96, of Oskaloosa and formerly of rural Rose Hill, IA, passed away peacefully Tuesday, November 13, 2018, at Homestead of Oskaloosa. Marvin Eugene Molyneux, son of Albert Zebulon and Agnes Gertrude (Warnock) Molyneux, was born October 7, 1922, at the rural home of his parents in Monroe Township, Mahaska County, Iowa. He was raised on the farm working beside his father and his brothers. He attended grade school in nearby Indianapolis and then high school in Barnes City. He rode his Harley Davidson motorcycle to school when the weather permitted, parking it in a nearby garage while in school. Marvin was the secretary/treasurer of his senior class and enjoyed those friendships his whole life. He began playing baseball in high school and played first base for the Indianapolis team well into adulthood. After high school, he traveled by motorcycle to Minnesota with his friend to work on a threshing crew. He also spent many extra hours custom baling hay to pay for his first farm. He married the love-of-his-life, Betty Lou Augustine, December 22, 1946, at the home of her parents in Monroe Township. They moved to their own farm in March of 1947. Over the years, they raised beef cattle, hogs, and chickens. Farming, for Marvin, was always much more than growing crops; he believed he was a steward of the land and aimed to improve it for those that followed him. As a young man, his father taught him how to use a tiling machine. In the 1950’s, Marvin purchased his own bulldozer and began building waterways, terraces, and ponds on his farms and several neighbors’ farms. He continued to operate his dozer until 2017, with memorable stories to share including clearing country roads of snow when the county crews were overwhelmed and building the figure 8 track at the Keokuk County Fairgrounds. Marvin was an active supporter of local fairs. He served on the board of directors for the Keokuk County Fair. He and Betty were one of the first to have a camper at the Southern Iowa fair where he helped develop the antique tractor area and made countless gallons of homemade ice cream. In 1999, he and Betty were selected to serve as the Southern Iowa Fair Senior King and Queen. Marvin and Betty were initially members of the Indianapolis Christian Church where they helped with many activities, and later joined the First Christian Church in Oskaloosa where he served as a deacon. He enjoyed hunting all wildlife on his land and was an expert shot with a shotgun. Playing cards, pitching quarters with friends, and fishing trips with the Gatton family to Minnesota, catching walleye and northern, were also some of Marvin’s favorite pastimes. Watching his children, grandchildren, and great-grandchildren participate in activities at North Mahaska School was very important to Marvin. He was a past member of the Barnes City Co-op Board and the New Sharon Country Club, where he enjoyed playing golf. Marvin loved his rural communities, when he got involved in a project, the whole family was also involved. In 1993, Marvin and Betty moved to Oskaloosa but remained active with the farm. In 1994, they began serving as escorts for bus trips across the U.S. and enjoyed many interesting tourist locations in their retirement years. Marvin never lost his love of motorcycles. He owned and operated many throughout his lifetime. He downsized with his last cycle, purchasing a scooter, which he rode daily to McDonald's for coffee with friends and to the farm. Marvin’s family was always his focus; everything he worked for was ultimately for them. He enjoyed working side-by-side with his son and son-in-law, and even after moving to Homestead, he drove daily to the farm to check on the boys, the cattle and the neighborhood until recently. His favorite name to be called was “Grandpa Marvin” by his grandchildren and great-grandchildren. Marvin celebrated his 96th birthday with his family in October, including his favorites of ham & beans, cornbread, and pumpkin pie. His family includes his children and their spouses: Mary and Mike Sexton of Rose Hill and Dennis and Jone Molyneux of Rose Hill; grandchildren: Devan (& B.G.) DeGeest of Rose Hill, and Sarah (& Russell) Huddleston of Rose Hill; great-grandchildren: Cauyer and Tieron Lamberson and Aubrey and Carter Huddleston. He is also survived by a brother and sister-in-law, Donald and LaVerne Molyneux of Thiensville, WI; a sister, Wilma Hudson of Oskaloosa; a brother-in-law, Milo Luers of Washington, IA; and sisters-in-law: Icel Molyneux and Betty Augustine, both of Oskaloosa. In addition to his parents, Marvin was preceded in death by his wife, Betty on April 20, 2016; an infant son, David; brothers: Cleo & Kenneth Molyneux; a sister, Betty Luers; brothers-in-law: Charles Augustine, Lyle Boender, and Jack Hudson; and a sister-in-law, Louise Molyneux Boender. Funeral services will be held at 10:30 a.m., Friday, November 16, 2018, at First Christian Church with Reverends Robert and Molly Goodrich officiating. Burial will be in Indianapolis Cemetery near What Cheer. This site is special to Marvin and his family, as his parents donated the land for the addition to the Indianapolis Cemetery. Visitation will begin at 11 a.m., Thursday, at the First Christian Church in Oskaloosa; the family will greet visitors from 4-6:30 p.m., Thursday evening. Langkamp Funeral Chapel is handling the arrangements. Memorial contributions can be made to the Indianapolis Cemetery.

The family of Marvin E. Molyneux created this Life Tributes page to make it easy to share your memories.

Marvin E. Molyneux, 96, of Oskaloosa and formerly of rural Rose...

Send flowers to the Molyneux family.