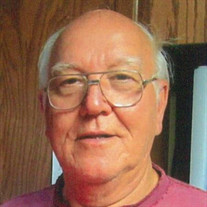 Marvin Rolffs, 79, of Oskaloosa passed away early Thursday morning, January 3, 2019, at the Mahaska Health Hospice Serenity House in Oskaloosa. Marvin Duane Rolffs, son of Dick and Minnie (Jansen) Rolffs, was born August 7, 1939, at the rural home of his parents near Sully, Iowa. He attended Sully Christian Grade School and then Sully High School, graduating with the class of 1957. After high school, he attended auto-mechanic trade school in Kansas City and then returned to Oskaloosa and began working for Louie Anders. Marvin married Janice Wichhart, November 9, 1961, at the First Christian Reformed Church in Pella. They made their home in Oskaloosa. In 1962, Marvin served six months in the Army and then served eight years in the Army Reserves. Marvin and Tom Kelderman opened the Rolffs-Kelderman Garage in 1965. In 1972, he ventured out on his own and opened Rolffs’ Auto Service on 9th Avenue East. Marvin operated the business for 40 years, retiring in 2012. Marvin was a long-time member of Bethel Christian Reformed Church. He loved being outside and taking the road less traveled, appreciating the sights and sounds of God’s creation. Marv was always excited for fishing and camping in Canada and trout fishing in Decorah with relatives and friends. Marv and Jan especially enjoyed traveling across the country and making trips to visit their children, grandchildren, and great-grandchildren. He enjoyed coffee time at McDonald's with friends. Marvin also enjoyed the challenge of putting his own signature on his inventions and improving things by working with his hands, fixing cars, and tinkering around his garage. Marvin had a servant heart big on helping anyone in need. His family includes his wife, Jan of Oskaloosa; his children: Debra (Tim) Kleveland of Fertile, IA; Rodney (Julie) Rolffs of Peoria, IL, and Michael Rolffs (Jennifer Gibson) of Mankato, MN; seven grandchildren: James (Rebecca) Kleveland of Marion, IA and their children: Jayna, Hailey and Tyler; Josh Kleveland (Sarah Yelli, fiancé) of Newton, Jessica (Derek) Brown of New Providence, IA and their daughter, Nora; Luke (Joy) Kleveland of Cedar Rapids, Kate Rolffs and Jordan Rolffs of Peoria, IL; and step-granddaughter, Jamie Gibson of Menomonie, WI. He is also survived by one brother, John (Shirley) Rolffs of Willmar, MN; sisters: Janet (Guy) Jansen of Pella, Dorothy (Marion) Vos of Oskaloosa, and Mildred Lanser of Pella,; a sister-in-law, Hermina Rolffs of Sully; a brother-in-law, Wilbur Vos of Sully,; and a brother-in-law and sister-in-law, Ron and Linda Wichhart of Pella; and many nieces, nephews, and friends. Marvin was preceded in death by his parents, Dick and Minnie Rolffs and his step-mother, Henrietta Rolffs; an infant son, Edwin Duane; two brothers: Henry and an infant brother, Dale Eugene; a sister, Cornelia Vos; and a brother-in-law, Louis Lanser. Funeral services will be held at 10:30 a.m., Monday, January 7, 2019, at the Bethel Christian Reformed Church with Rev. Douglas Van Der Pol officiating. A family prayer service will be held in the fellowship hall at 10:15 a.m., before the funeral service. Burial will be in Forest Cemetery. Visitation will begin at 11 a.m., Sunday, at Langkamp Funeral Chapel; the family will greet visitors from 2 - 5 p.m., Sunday afternoon. Memorial contributions can be made to the Oskaloosa Christian Grade School and Mahaska Health Hospice Serenity House.

The family of Marvin Duane Rolffs created this Life Tributes page to make it easy to share your memories.

Send flowers to the Rolffs family.