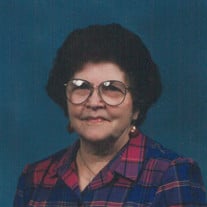 Mary E. Van Maanen Brock, 95, of Oskaloosa passed away Monday morning, February 11, 2019, at the Mahaska Health Hospice Serenity House in Oskaloosa. Mary Evelyn Brock, daughter of John Heath and Edith (Blake) Van Asdall, was born May 16, 1923, in Altoona, Iowa. She grew up in the Sully area where she attended school. She married John Van Maanen September 20, 1941, and to this union, five children were born: Linda, Mary Anne, Lora, David, and Edie. She and John were married 32 years. She later married Dick Brock in Florida. Throughout her life, Mary was always involved in her community: she served on the PTA, as a Girl Scout leader, and with 4-H. At her church, she served as a Sunday school teacher, played the piano, and assisted anywhere someone needed a helping hand. Because of her love for children, she became a nanny in Massachusetts for six years. Her love of baking was often shared to give thanks to community members or to encourage others. Mary will be deeply missed by her family and friends. She asks that her passing is celebrated with laughter and joy as she has gone to be with her Heavenly Father. Her family includes her children: Linda Joy (Michael) Johnson of Milton, FL, Mary Anne (Donald) Brooks of Fremont, Lora Lee (Jack) Wilson of Fairview Heights, IL, David John (Evonne) Van Maanen of Oskaloosa, and Edie Van Maanen of Oskaloosa; twelve grandchildren; 21 great-grandchildren; and eight great-great-grandchildren. In addition to her parents, she was preceded in death by her two brothers: Byron and Roy Van Asdall; two sisters-in-law: Edith and Katherine Van Asdall; a daughter-in-law, Ruthie Van Maanen; a son-in-law, Harold Devenport; two grandchildren: Kelly Brooks and Shannon Johnson; and one great-grandchild, Malahkaih Smith. Funeral Services for Mary will be held at 10:30 a.m., Friday, February 15, 2019, at Fellowship Bible Church in Oskaloosa. Burial will be in Franklin Cemetery near Bondurant, IA. Visitation will begin at 10 a.m., Thursday, at Langkamp Funeral Chapel; the family will greet visitors from 4-6 p.m., Thursday evening. Memorial contributions can be made to the Mahaska Health Hospice Serenity House in care of Mahaska Health Foundation.

The family of Mary Van Maanen Brock created this Life Tributes page to make it easy to share your memories.

Send flowers to the Brock family.