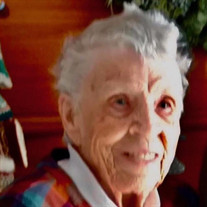 Mary Frances Campbell, 92, of Oskaloosa, Iowa died on Sunday, January 24, 2021, at the Mahaska Health Hospice Serenity House in Oskaloosa. Mary Fran was born on October 25, 1928 in Council Bluffs, Iowa to Dr. Glenn and Edna Anderson. She grew up in Avoca, Iowa with her brother, George. After graduating high school in 1946, Mary Fran went to the University of Iowa and received her Bachelor of Arts degree in Occupational Therapy in 1950. On June 17, 1950, she married her husband of 70 years, Dr. Donald Keith Campbell of Oskaloosa. Mary Fran is survived by her four children: Scott (Kym Life) of Oskaloosa, IA, Elizabeth (Joel) Maguire of Niwot, CO, Martha (Art) Winsky of Kimball, SD and Molly (Peter Riewer) Fortney of Fargo, ND; by seven grandchildren: Aaron Winsky of Boulder CO, Tyler (Kristin) Winsky of Lino Lakes, MN, Timothy (Hannah) Maguire of Lafayette, CA, Callie (Vince) LoPresti of San Anselmo, CA, Bryson (Amy) Winsky of Dubuque IA, Hiatt Campbell of Seattle, WA and River Campbell a student in Boulder CO; and eight great- grandchildren: Addelyn, Carson, and Nora Winsky, Linden Maguire, Campbell and Barron Lopresti, and Walter and Callen Winsky. Mary Fran’s loving husband, Keith, her parents of Avoca, IA and her brother and sister-in-law (Dr. George and Kathryn Anderson) of Iowa City, IA, proceeded her in death. Mary Fran was active in volunteer work. She was the YWCA board president in 1969 at the time the YMCA and YWCA Community Center was built in Oskaloosa. She organized and assisted in swimming lessons for children with disabilities and taught knitting lessons at the Y. She did volunteer work for the Republican party and the Band of the 70s. She was a member of PEO for many years. She took flying lessons and soloed. Mary Fran had two passions. One was spinning and knitting and working with fiber. She was a prolific knitter and would spin the wool, dye the wool, and then hand or machine knit sweaters and other garments. Her other passion was spending time at the earth home she and Keith had built at Gull Lake in MN. This included time in the winter as well as in the summer. She enjoyed fishing, boating, and other lake activities. Their greatest joy was having their children, grandchildren, and great grandchildren join them at their cottage. Memorial donations may be made to the Mahaska Community Recreation Foundation and Mahaska County Conservation Board. Because her husband, Keith Campbell, died so recently, memorials previously made in his name will be considered as memorials for Mary Fran as well. Langkamp Funeral Chapel and Crematory is handling Mary Fran’s arrangements. A memorial service for Mary Fran and Keith will be held at a later date.

The family of Mary Fran Campbell created this Life Tributes page to make it easy to share your memories.

Send flowers to the Campbell family.