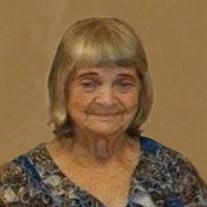 Mary Lou Fielder, 83, of Oskaloosa passed away Friday evening, March 27, 2020, at MercyOne Medical Center in Des Moines, Iowa. Mary Lou Fielder, daughter of Cecil and Pansy (Smith) Allgood, was born on October 21, 1936, in Oskaloosa, Iowa. She attended Oskaloosa schools and while in school worked at Sears and Robuck Department Store. On July 7, 1956, she married a young Navy veteran, Richard Eugene Fielder. They made their home in Oskaloosa. Later in their lives, both Mary and Richard worked at the Oskaloosa Hy-Vee from 2002 to 2009. Mary loved to garden, spend vacations in Colorado, and weekends at their cabin on the river. She was a loving wife and a devoted mother of four children. Mary had a love for country music, especially Elvis and Luke Bryon. Her family includes her children: Terry Fielder of Oskaloosa, Cindy (Don) Howard of Oskaloosa and Lesa Vest of Hartford, Iowa; six grandchildren: Steven, Stephanie, Amanda, Ashley, Heather and Heidi; two step-grandchildren: Amy and Luke; and 12 great-grandchildren. In addition to her parents and her husband on February 26, 2011, Mary was preceded in death by her son, David Fielder, and two brothers and a sister. As was her wish, Mary’s body has been cremated. Burial of her ashes will be in Forest Cemetery. Langkamp Funeral Chapel & Crematory is handling the arrangements. Memorial contributions can be made to Main Street Oskaloosa to be used for the Lighted Christmas parade celebration or to the family to be designated later.

The family of Mary Lou Fielder created this Life Tributes page to make it easy to share your memories.

Send flowers to the Fielder family.