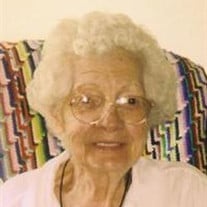 Mary Jane Jones Clester: God called Mary home on Saturday evening at the age of 94 years, 11 months and 27 days. Mary is survived by a brother, Evan R. Jones of Marshalltown, IA; a niece, Alyce (James) Chance of Manilla, IA; great nephews, Jeffery (Vivian) Chance of Denison, IA and James (Kris) Chance of Defiance, IA; Joseph Chance of Westphalia, IA; a great niece, Susannah (Andrew) Chance of Gilmanton Iron Works, NH; a great great niece, Gabrielle Rose Chance of Denison, IA and a stepson, Ron (Diane) Clester of Albia, IA and many friends. Mary Jane Jones Clester, daughter of William M. and Hannah Young Jones, was born November 2, 1910 in Hocking, Iowa. When the coal mines closed in Hocking, Mary and her family moved to Albia, where she was a 1928 graduate of Albia High School. After graduation, she began working at the United Telephone Company in Albia; she worked there for 33 years, of which she was chief operator for 8 years. On December 7, 1952 she married James Clester at the United Methodist Church in Albia. They lived in Albia for several years, before moving to Coolidge, Arizona, in 1962. There they both worked in a home for special needs children, retiring in 1973. They then returned to Iowa where they settled in Brazil, IA. After James' death, Mary continued to live in their home in Brazil, until an illness necessitated moves to the Shamrock Heights Apartments and later the Golden Age Care Center, both in Centerville, IA. Mary enjoyed reading, traveling and spending time with family. Mary was preceded in death by her parents; her husband, James on April 4, 1997; a brother, William I. Jones and Annie Dale Wiley, who lived with Mary's family. PDF Printable Version

The family of Mary Jane Jones Clester created this Life Tributes page to make it easy to share your memories.