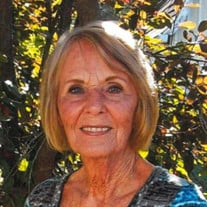 Mary Lue McCartie, 75 of Oskaloosa passed away June 19, 2019, at UnityPoint Methodist Medical Center in Des Moines IA. Mary Lue McCartie, daughter of Carl James and Elizabeth Helen (Davis) Jones, was born May 22, 1944, in Fairfield, Iowa. She began grade school in Keota and after moving to Oskaloosa attended Webster School. While in high school she was in choir, glee club, pep club, the yearbook staff, quill and scroll and was also the homeroom president; she graduated from Oskaloosa High School in 1963. She then attended the Ottumwa Beauty Academy and owned and operated a salon in Oskaloosa for several years. She married Donald Gene McCartie, May 21, 1969, at Rock Island, Illinois. They made their home in Oskaloosa. Mary Lue eventually returned to Indian Hills for a teaching degree and then Buena Vista College for degrees in Psychology and Human Services. She worked for the Iowa Department of Human Services for more than twenty years. After she retired, she volunteered at Mahaska Health Partnership and worked part-time for the YMCA Day Care Center. She was a member of the Red Hat Hotties and enjoyed going to their activities and functions. Mary Lue attended the Central United Methodist Church. Mary Lue is survived by Donald G. McCartie of Oskaloosa; her children: Amy Hamilton and Chad McCartie, also of Oskaloosa; seven grandchildren: Meagan, Ali (Brandon), Maddie, Austin, Logan, Jenna, and Marley. In addition to her parents, Mary Lue was preceded in death by a stillborn brother. Funeral services will be held at 10:30 a.m., Saturday, June 22, 2019, at Langkamp Funeral Chapel with Rev. Bruce Wittern of Central United Methodist Church officiating. Burial will be in Forest Cemetery. Visitation will begin Friday after 10 a.m. at Langkamp Funeral Chapel; the family will greet visitors from 5-7 p.m., Friday evening. Memorials can be made to Mahaska Health Hospice Serenity House.

The family of Mary Lue McCartie created this Life Tributes page to make it easy to share your memories.

Send flowers to the McCartie family.