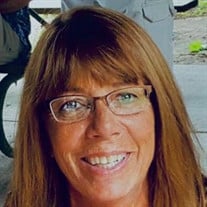 Mary Major, 60, of Oskaloosa passed away Sunday afternoon, September 15, 2019, at the Mahaska Health Hospice Serenity House in Oskaloosa. Mary Lee Major, daughter of Marion “Jim” and Dorothy Jean (Groenendyk) McDonough, was born May 16, 1959, in Oskaloosa, Iowa. After graduating from Oskaloosa High School in 1977, Mary attended Patricia Stevens Career College in Omaha, Nebraska. Upon returning to Oskaloosa, she worked at Mahaska State Bank. She then moved to Overland Park, Kansas, where she continued working in the banking industry. While in Kansas, she met Dan Major, and they married September 3, 1988, at the Good News Chapel. They had two children, Cody and Cortney, and raised their family in Oskaloosa. Through the years, she worked at Econo Foods, Hy-Vee Floral, and Jaarsma’s Bakery. Mary volunteered at Mahaska Health in the gift shop, designing floral arrangements. She was a member of the Good News Chapel. Mary had a zest for life; she loved to sing, dance and play the tambourine. She loved camping with friends and family, especially at the Iowa State Fair. Whether it was softball in the summer, bowling in the winter, or just watching her kids play, Mary loved sports. She enjoyed visiting with people - to know Mary was to love Mary. Her big heart drew many people to her and gave her a host of friends. Mary’s family includes her husband, Dan Major, her children: Cody Major of Oskaloosa and Cortney Major of Solon; a brother and sister-in-law, Jeff and Kirstin McDonough of Pentwater, Michigan; and her niece and nephew, Linnea and Gannon McDonough. Mary was preceded in death by her parents. Funeral Services for Mary will be held at 10:30 a.m., Thursday, September 19, 2019, at the Good News Chapel in Oskaloosa with Pastor Alvern Boetsma officiating. Burial will be in Forest Cemetery. Visitation will begin after 11 a.m. Wednesday at Langkamp Funeral Chapel; the family will greet visitors from 6-8 p.m. Wednesday at the funeral chapel. Memorial contributions can be made to the Good News Chapel.

The family of Mary Lee Major created this Life Tributes page to make it easy to share your memories.

Send flowers to the Major family.