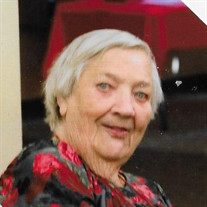 Mary Lou McBride, 83, of Oskaloosa passed away Friday, March 22, 2019, at Iowa River Hospice in Marshalltown, Iowa. Mary Lou (Phipps) McBride was born May 30, 1935 in New Sharon, Iowa to Claib Albert and Ida May DeWeese Phipps. She attended school in New Sharon and Oskaloosa before moving to Rock Island, Illinois when she was around eight years old. Mary attended school through ninth grade and then worked at numerous places such as hospitals, restaurants, nursing homes, factories and home child care. Mary married Roy William Race, May 8, 1954, in Rock Island. By that union 12 children were born, they all passed away except Elizabeth Race and Laverne Race. Mary and Roy divorced March 25, 1966. He died January 28, 1977. She married Edward Clarkson March 28, 1976. They divorced March 7, 1977. He died February 29, 1980. Mary married Clyde Thomas McBride in June 16, 1978. They moved to Oskaloosa in June 1980. Mary was a homemaker and also enjoyed volunteering. She was a past 4-H leader in Rock Island, IL and also had a B-Q Club for kids. Mary volunteered at nursing homes in Oskaloosa, helping with BINGO and visiting with the residents. Mary enjoyed BINGO, crossword puzzles, dancing and traveling. Mary loved children and her greatest joy was spending time with her children and grandchildren. She was member of the V.F.W. and the Eagles in Oskaloosa. Her family includes a son, Laverne Race of Oskaloosa; a daughter, Elizabeth Race of Rock Island, IL; three grandchildren: Monica, Veronica and Christina Lopez; ten great-grandchildren; a sister, Charlotte Brown of Bothell, Washington and a good friend, David Ver Schuure of Oskaloosa. Beside her parents, and her husbands, Roy Race, Edward Clarkson and Clyde McBride, she was preceded in death by seven sisters: Mildred Williams, Millie Phipps, Dorothy Phipps, Phyllis Spaulding, Lucille Schippers, Erma Phipps, and Alice Baker; and a brother, Jerry Phipps; two daughters: Claudette-Lynn and Carol Jean and numerous children in infancy. Funeral services for Mary will be held at 10:30 a.m., Wednesday, March 27, 2019, at Langkamp Funeral Chapel with Pastor Alvern Boetsma of the Good News Chapel officiating. Burial will be in Beacon Cemetery. Visitation will begin at 9 a.m. Wednesday; the family will greet visitors from 9:30 a.m. to service time. Memorials can be made to her family.

The family of Mary Lou McBride created this Life Tributes page to make it easy to share your memories.

Send flowers to the McBride family.