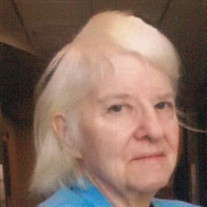 Mary McSparen, 75, of Oskaloosa passed away Sunday morning, May 27, 2018, at the MHP Serenity Hospice House in Oskaloosa. Mary Ellen McSparen, daughter of Louis & Ellen (Geppert) McGregor, was born April 27, 1943, near Madison, Wisconsin. As a youngster, the family moved to Kimball, South Dakota. After high school graduation in 1962, Mary attended the University of South Dakota in Vermillion where she earned her teaching certificate. Her first adventure in teaching took her to Wyoming. From there she moved to Albuquerque, New Mexico, where she was employed at a jewelry store. It was there that she met Donald McSparen in 1977, a young navy man, stationed at Kirkland Air Force Base. Mary and Donald married September 1, 1978, in Albuquerque and she stepped into the role of Navy wife. In 1979, the family moved to Belen, NM and from there they were moved to Alameda, CA, Lemoore, CA, Norfolk, VA, Adak, Alaska and several other locations. In July 1993, the family moved to Oskaloosa and Mary went to work for Pella Corp. Mary lived a simple life; she loved her husband, children, and grandchildren deeply. She read her Bible daily, enjoyed gardening, coffee with friends a McDonalds and an occasional trip to Prairie Meadows Casino. She was a member of the D.A.V. Her family includes her husband of almost 40 years, Donald McSparen; her children and their spouses: Michelle and Tom Hillman of Gardnerville, NV, and twin sons: Donnie McSparen of Oskaloosa and Travis and Stephanie McSparen of Pella; three grandchildren: Jaden, Bella and Breezie McSparen, all of Oskaloosa; a sister, Catherine (Leo) Hart; three brothers: Wallace (Clara) McGregor of Kimball, SD, Ralph (Bonnie) McGregor of Parkston, SD and Patrick & Marlene McGregor of Chamberlain, SD. In addition to her parents, Mary was preceded in death by three brothers: Bill, Leonard and Paul McGregor. Funeral services for Mary will be held at 10 a.m., Thursday, May 31, 2018, at Langkamp Funeral Chapel with Rev. John Spiegel of St. Mary’s Catholic Church officiating. Burial will be in Forest Cemetery. Visitation will be held from 10 a.m. to 6 p.m., Wednesday at the funeral chapel. Memorial contributions may be made in her name and will be designated later.

The family of Mary McSparen created this Life Tributes page to make it easy to share your memories.

Mary McSparen, 75, of Oskaloosa passed away Sunday morning, May...

Send flowers to the McSparen family.