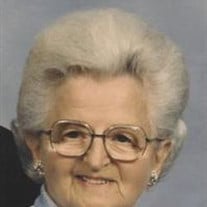 Mary Louise Michaels: Mary passed away at the Ebenezer Ridges Care Center in Burnsville, MN at the age of 90 years and 18 days. Mary's memory is honored by a daughter & her husband, Holly & Ron Duffy of Eagan, MN; a son & his wife, Mike & Monika Michaels of Plattsmouth, NE; and four grandchildren: Bret Duffy of Savage, MN; Kevin Duffy of Eagan , MN; Eric Michaels of Dell Rapids, SD; and Wendy Morrison of Papillion, NE. Mary was blessed with four great grandchildren: Jesse, Emily, Luke & Jaxon. She is also survived by three nephews & two nieces. Mary Louise Michaels was born July 22, 1914, in Chicago, IL, to Louis and Theresa Henzel Keller. She went to school in Chicago and attended Ravenswood Grammar School & Stockton Junior High School, and graduated from Lake View High School. She was a member of the National Honor Society all 4 years of high school. She then took art classes at the Art Institute of Chicago. Mary tried out for the 1932 Olympics in sprint events. She married Richard W. ""Dick"" Michaels on June 6, 1936 in Chicago. They lived in Chicago where Dick worked for Clow Corporation and Mary as a secretary. Due to Dick's job assignments with Clow, they moved to Minneapolis, MN, in 1948; Glen Ellyn, IL, in 1953; and finally Oskaloosa in November 1954. Mary was a longtime resident of Oskaloosa, IA, and moved to Eagan in March 2004 to be near family after almost half a century in her home on Solar Drive. Mary was a member of St. Mary's Catholic Church, a former member of the Oskaloosa Art League, Elmhurst Country Club, the Grant School PTA Board, and the YWCA Board of Directors. Mary & Dick were past members of the University of Iowa ""I"" Club and were avid Iowa & Chicago sports fans. They enjoyed traveling together all over the United States and half a dozen trips to Europe. Mary also enjoyed golfing, painting, and designing & sewing clothes. Mary was preceded in death by her husband, Dick in January 2002, after 65 years of marriage; her parents; three sisters & their husbands: Kathryn & Jim Lebesch, Jackie & Wally McKee, and Shirley & Herb Webber; one brother & his wife: Ed & Marji Keller; three nephews and one niece. PDF Printable Version

Mary Louise Michaels: Mary passed away at the Ebenezer Ridges Care Center in Burnsville, MN at the age of 90 years and 18 days. Mary's memory is honored by a daughter & her husband, Holly & Ron Duffy of Eagan, MN; a son & his wife, Mike & Monika... View Obituary & Service Information

The family of Mary Louise Michaels created this Life Tributes page to make it easy to share your memories.

Mary Louise Michaels: Mary passed away at the Ebenezer Ridges...

Send flowers to the Michaels family.