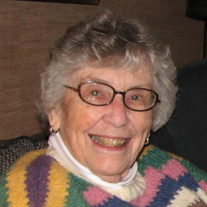 Mary Porter Sunstrum passed away Friday, December 18, 2020, at Mahaska Health, just shy of her 98th birthday in January. Mary’s family includes a brother, John (Jeanne) Porter of Oskaloosa and a sister, Martha Ingels, of Mesa, AZ, a daughter, Barbara (Jim) Lindenmayer, of Ottumwa; sons, John (Patti), of Ankeny, and Peter (Susan), of Redmond, Wash.; granddaughters: Kate (Jeff) Sunstrum Niedermann, of Marshalltown; EJ (Timothy) Sunstrum Lillwitz, of Ankeny; a grandson, C. Andrew (Brooke) Sunstrum, of Ankeny; granddaughters: Julie (Shawn) Lindenmayer Smith of Gainesville, FL; Diane (Kristian) Lindenmayer Cassimire, of Macomb, IL; and Laney and Nelly Sunstrum of Redmond, Wash.; and great-grandchildren: Porter and Teagan Niedermann, Elliott and Callie Lillwitz, and Mikah and Emery Cassimire. She was preceded in death by her parents and her best friend and loving husband, Bill Sunstrum. At her request, the body was cremated with private interment at a later date. Mary was born January 21, 1923, in Oskaloosa, Iowa, to RV and Irene Barnhouse Porter. She grew up in Oskaloosa and graduated with the class of ’41. Mary attended Stephen’s College in Columbia, MO for two years and later attended the University of Iowa where she was a member of the Delta Gamma Sorority. Mary and William Barnes Sunstrum were united in marriage on June 25, 1946, after Bill was discharged from the Army with the 281st Combat Engineers at the end of WW II. They made their home in Oskaloosa, where Bill joined his family business, Sunstrum’s Store for Men and Boys. Mary enjoyed classical music and played both the piano and the violin. She played with a small group of friends for several years at each other’s houses for fun. She sang in the choir at St. Paul’s Congregational United Church of Christ for many years. Mary truly enjoyed knitting and was an excellent knitter. She also enjoyed playing golf and following Iowa Hawkeye sports. Mary vacationed with her family over the years at her favorite place, Gull Lake, MN. Mary’s family was extremely important to her, and she treasured her lifelong Oskaloosa friends. Memorial donations may be made to the Oskaloosa High School Orchestra. Langkamp Funeral Chapel & Crematory is handling Mary’s final arrangements.

The family of Mary Porter Sunstrum created this Life Tributes page to make it easy to share your memories.

Send flowers to the Sunstrum family.