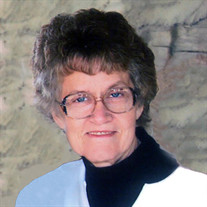 Mary L. Verploegh, 79, of Oskaloosa passed away Sunday evening, September 29, 2019, at the Mahaska Health Serenity House in Oskaloosa. Mary Louise Verploegh, daughter of Bruce and Mary “Bessie” Elizabeth (Lathrop) Pugh, was born February 3, 1940, in Oskaloosa, Iowa. She was a 1958 graduate of Oskaloosa High School. As a young lady she was involved in the Salvation Army, where she completed a six-year Bible course from the 7th to the 12th grades. She also played the Alto Baritone in the Salvation Army Band and enjoyed working with the disabled at Camp Madrid. She married Christiaan Cornelius Verploegh, November 15, 1958, at the Little Brown Church in Nashua, Iowa. They made their home in Oskaloosa. Mary dedicated her time to homemaking and her family while her children were young and in 1976 she started working in housekeeping at Mahaska Hospital. She remained at the Hospital for 29 years, retiring in 2005. Mary was a member of the Central Reformed Church where she was active in Women’s Bible Study. Her family includes her son and daughter-in-law, Gary and Karen Verploegh of Fremont; her daughter, Dorothy Verploegh of Oskaloosa; four grandchildren: Mindy (Brad) Wilken of Oskaloosa, Jill (Brad) McMahan also of Oskaloosa, and Brett Stout (stationed in the United Kingdom while serving in the United States Air Force) and Nichole Stout of Kalona, IA; four great-grandchildren: Reid, Ryleigh and Rhett Wilken of Oskaloosa and Maggie McMahan of Oskaloosa; one brother: Kenneth Pugh of Oskaloosa; and a sister, Carol Kinderknecht of Oskaloosa; and a special friend Cathy Robertson, who provided exceptional care for both Mary and Christiaan. Besides her parents, Mary was preceded in death by her husband, Christiaan; an infant daughter, Carol Jean Verploegh who died in 1970; and a brother, Robert Pugh. Funeral Services will be held at 10 a.m., Saturday, October 5, 2019, at Langkamp Funeral Chapel with Rev. Jon Nelson officiating. Burial will be in Old White Cemetery. Visitation will begin after 11 a.m. on Friday at Langkamp Funeral; the family will greet visitors from 4-6:30 p.m. Memorials can be made to Vacation Bible School at Central Reformed Church Bible School or Mahaska Health Hospice Serenity House.

The family of Mary L. Verploegh created this Life Tributes page to make it easy to share your memories.

Send flowers to the Verploegh family.