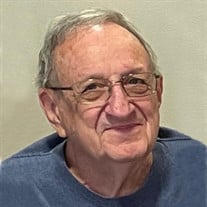 Melvin W. Winegar, 75, of Pella and formerly of Oskaloosa, passed away peacefully at home on Friday, August 13, 2021. Melvin was born November 21, 1945, to Gilford and Jane (Klein) Winegar. He attended Pella schools, and after high school, Mel joined the US Army and served as an aircraft mechanic in Vietnam. His passion for aviation continued after his service and led to him becoming the manager for the Oskaloosa Municipal Airport for 25 years. Mel continued with his love for all things mechanical at Pella Corporation, where he worked as a maintenance technician before retiring in 2017. Mel married Judy DeKock in 1970, and two sons, Curtis and Craig, were born from this union. Mel and Judy later divorced. Mel married Linda (Wymore) LaRue on May 13, 1988. Many fond memories were made at the airport, boating, and jet-skiing during weekends spent at Lake Ponderosa. The family was brought together at gatherings that he and Linda hosted at their home. Mel loved to be outside grilling food and was a big fan of muscle cars and Nascar racing, but aviation was always close to his heart. In November 2020, Linda passed away, which left a huge void. Mel recently moved back to Pella as a resident of Independence Village. He did his best to keep himself busy and enjoyed driving around town, making new friends, and visiting old acquaintances. Left to cherish his memory are his sons; Curtis (Jami) Winegar of Pleasant Hill and Craig (Penni) Winegar of Rose Hill; his step-children: Shawn (Traci) LaRue of Eddyville, Brandy (Eric) Pacheco of Moorpark, California, and Sara (Mike) Laesch of Verona, Wisconsin; his grandchildren: Jenna, Cody, Mallari, Kayli (Trevor), Breanni (Kyle), Isaiah, Amerisi, Lynzi, Josiah, Adam, Grant, Reagan, Aspen, and Easton; and two great-grandchildren, Adalynn and Braxtyn. He is also survived by his sister Ruth (Doug) Roorda of Lake Ozark, MO, and brother-in-law, Larry (Pam) Wymore of Momence, IL. Mel was preceded in death by his wife, Linda, his parents, and two sisters Marilyn and Beverly. Graveside Services for Mel will be held at Waveland Cemetery north of Prairie City at 11 a.m., Friday, August 20, 2021, with Pastor Alvern Boetsma officiating. Open visitation will be held at Langkamp Funeral Chapel and Crematory from noon to 7 p.m. with the family present from 4 – 7 p.m. on Thursday, August 19, 2021. In lieu of flowers, contributions may be made to the family to be used for a memorial in Melvin’s honor.

Melvin W. Winegar, 75, of Pella and formerly of Oskaloosa, passed away peacefully at home on Friday, August 13, 2021. Melvin was born November 21, 1945, to Gilford and Jane (Klein) Winegar. He attended Pella schools, and after high school, Mel... View Obituary & Service Information

The family of Melvin Winegar created this Life Tributes page to make it easy to share your memories.

Melvin W. Winegar, 75, of Pella and formerly of Oskaloosa, passed...

Send flowers to the Winegar family.