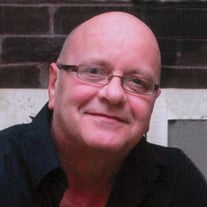 Mike Beal, age 65, passed away Wednesday, August 5, 2020, at his home in Oskaloosa. Michael Ray Beal, son of Harold Clarence and Wanda Louise (Larkins) Beal, was born August 14, 1954, in Oskaloosa. He attended Oskaloosa schools, and during the 8th grade, he began working full-time to help support his family, while his brothers were serving in the military. He was determined to go back to school; he earned his G.E.D. and later attended Indian Hills, where he continued his education studying electrical engineering. After completing his training, he worked at Intraco Cablevey and was able to use his talents in research and development. He was involved in the development of the button pulley system, which is widely used in the distribution of food in the livestock industry. Mike worked 20 years at Intraco before starting a job with CNHI, a publishing company; there, he worked as a pressman and production manager for ten years. Mike concluded his career working at Pella Regional Health Center, where he served eleven years in Environmental Services before retiring in 2018. Mike met the love-of-his-life, Debra Goldsworth, in junior high, and they were married on August 14, 1973. Mike was a fun-loving soul – he was an avid bowler and enjoyed roller-skating and dancing. He played the drums in a band called the “Roadmasters,” and played in many local establishments. Mike enjoyed attending Friday’s After 5 on the square and was an avid Hawkeye fan. His favorite holiday of the year was Halloween; he devoted much time and thought to the development of his costumes and loved the parties. He also enjoyed grandchildren and attending their extra-curricular activities. His family includes his wife of almost 47 years, Deb; his children: Mike Beal, Veronica (Zachary) Johnson, and Daniel Beal, all of Oskaloosa; and two grandchildren: Lydia and Liam Johnson. He is also survived by his siblings, Jimmie L. (Susan) Beal of Texas, Ronnie L. (Kathy) Beal of Tracy, Dennis H. (Deborah) Beal of Oskaloosa, and Ellen L. (Gary) Bunnell of Centerville; a brother-in-law, Loren Neal Goldsworth of Council Bluffs; his mother-in-law, Vonna Goldsworth of Oskaloosa; and several nieces, nephews and cousins. In addition to his parents, Mike was preceded in death by a half-brother, Martin Beal. As was his wish, Mike’s body has been cremated. A Celebration of Life service will be held at a later time. Langkamp Funeral Chapel & Crematory is handling his arrangements. Memorial contributions can be made to Mahaska Health Foundation and directed to Hospice.

The family of Michael Beal created this Life Tributes page to make it easy to share your memories.

Send flowers to the Beal family.