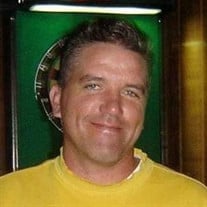 Michael Thomas Diehl (52) was born on May 4th, 1969, to Fredrick and Annabelle Diehl in Monticello, Iowa. He grew up and went to school in Osceola, Iowa. Michael attended Iowa Lakes Community College and South Dakota State University. He received degrees in Horticulture and Landscape Architecture. He owned his own landscaping business and enjoyed his work. Michael married Dawn (Menne) in 1990. They lived in Denver, Colorado, and surrounding areas where their two children were born and raised. Gabrielle (Nicholas) Flowers of Mesa, Arizona, and Joshua Diehl of Davenport, Iowa. They moved back to Iowa in 2010 and settled in Oskaloosa, Iowa. His family was important to him. He was very proud of his children; ask anyone he talked to. Michael loved music and movies, and he was an extreme sports fan, from baseball (Go Cubs Go) to NASCAR, as well as high school and college wrestling. Michael was diagnosed with stage 4 colon cancer in July of last year (2021). He was a fighter until the end, when his organs and body gave up. He passed away in the arms of his wife and children, surrounded by his family, on April 22nd, 2022. He is survived by his wife, Dawn; and two children: Gabrielle (Nicholas) and Joshua; his mother, Annabelle; sister, Laura Haines; and brothers: Dr. David Diehl (Kathy) and Matt Diehl (Cathy); along with many nieces and nephews, that he was close to and supported, especially Bret. He also left many extended family members; you know who you are. You knew he liked you if he gave you a nickname. He was preceded in death by his father, Fredrick. Michael’s family invites you to celebrate his life with them. Visitation will be held Thursday, April 28th, 2022, 3-6 pm, at Kinsmen Keep, 302 N A St Ste 110 Oskaloosa, Iowa 52577. A private family service will be held at a later date. In lieu of flowers, the family suggests making donations to Missions Blood & Cancer at Mercy One, 411 Laurel St Ste A300, Des Moines, Iowa 50314; Pella Regional Health Oncology, 404 Jefferson St, Pella, Iowa 50219; orThe Pink Tractor Foundation, 16315 20th Ave, St. Charles, Iowa, 50240. A very special and heartfelt thank you to Missions Blood & Cancer Mercy One Des Moines, especially Dr. Elhaddad, Nurse Shelby and staff, the Pella Regional Health Oncology nurses and staff, and The Pink Tractor Foundation.

Michael Thomas Diehl (52) was born on May 4th, 1969, to Fredrick and Annabelle Diehl in Monticello, Iowa. He grew up and went to school in Osceola, Iowa. Michael attended Iowa Lakes Community College and South Dakota State University. He received... View Obituary & Service Information

The family of Michael Thomas Diehl created this Life Tributes page to make it easy to share your memories.

Send flowers to the Diehl family.