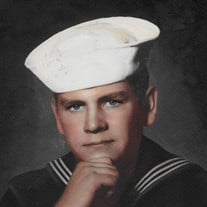 Michael “Oly” Olson, 66, of Oskaloosa, passed away Sunday, November 24, 2019, at the Mahaska Health Hospice Serenity House in Oskaloosa. Michael Alan Olson, son of Arthur G. and Beulah Marie (Harklau) Olson, was born, August 25, 1953, in Austin, MN. He grew up and attended school in Austin. Following his education, Oly enlisted, August 30, 1971, in the U.S. Navy and served on the USS Bryce Canyon. He was discharged August 25, 1975 and moved to Ottumwa, Iowa. He later moved to Oskaloosa where he went to work for Goodyear Tire Company. Oly married Sandra Dye in August of 1980 in Oskaloosa; to that union, a son, Mitch Ryan Olson, was born. They later divorced. He went to work for Pella Corporation in 1977 and worked there for 20 years. Oly then went to work for Snyder Manufacturing in New Sharon and then for Hayfield Windows in Hayfield, MN, for a short time. He was finally employed with Hormel in Austin, MN. After suffering two brain aneurysms, he returned to Oskaloosa in 2005. In his spare time, Oly enjoyed drag racing and demolition derby and traveling the state to compete. Woodworking, carpentry, boating, camping and watching western movies also things he enjoyed. He was a member of the American Legion, V.F.W., and the Eagles. His family includes his son and daughter-in-law, Mitch and Jess Olson of Pleasantville, IA; his daughter and son-in-law, Stephanie and Brad Van Mersbergen of Oskaloosa; four grandchildren: Jaxson and Madi Olson and Wade and Dane Van Mersbergen; sisters: Roberta (Bob) Finneseth of Austin, MN and Sharon (Lynn) Swindel of Minneapolis, MN; and several nieces. In addition to his parents, Oly was preceded in death by two brothers: Craig “Gordy” Olson and Greg Olson; and a sister, Debbie Olson. As was his wish, his body has been cremated. Burial of his ashes will be in Hillcrest Cemetery near Austin, Minnesota. Memorial contributions can be made to Mahaska Health Hospice Serenity House, or the American Legion Post #34.

The family of Michael "Oly" Olson created this Life Tributes page to make it easy to share your memories.

Send flowers to the Olson family.