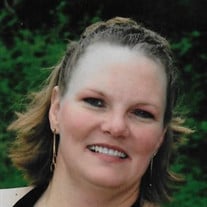 Michelle Edwards, 48, of Oskaloosa passed away Wednesday, August 9, 2017, at her home. Michelle Sue Edwards, daughter of Sheldon and Karen Kay (Smith) Moon, was born October 11, 1968, in Norwalk, California. Michelle was a 1986 graduate of Norwalk High School. Soon after high school, she married Dan and to that union, two daughters, Amber and Tiffany, were born. They later divorced. Michelle moved to Iowa in 1992 and lived with her mother in Albia. She married Leland Decker, and to that union a son, Andrew was born. They too, later divorced. Michelle married Dave Edwards, May 8, 2009, at Lake Keomah. She worked at Pella Corp until 2006, and at that time, she began attending Indian Hill Community College, earning an L.P.N. degree. Her first employment as a nurse was at West Ridge Nursing Home in Knoxville; she worked there until 2012. Michelle enjoyed shopping, country music, making desserts, sporting events, garage sales, flying ultra-light aircraft, which she began at age 12, and collecting Hello Kitty memorabilia. Her family includes her husband, David Edwards of Oskaloosa; two daughters, Amber Copeland of Keosauqua, Iowa and Tiffany (Mikki) Decker of Ankeny; a son, Andrew Decker of What Cheer; four grandchildren: Maclin and Landry Decker, Madison Greiner and Abel Copeland; and a brother, Kyle Moon of Colorado. Michelle was preceded in death by her parents. A memorial service for Michelle will be held at 1 p.m., Saturday, August 12, 2017, at Garland-Van Arkel-Langkamp Funeral Chapel with Pastor Guy Almon of Gateway Church of the Nazarene officiating. Visitation will begin at 9 a.m., Saturday at the funeral chapel; the family will be present from noon until service time to greet visitors. Memorials may be made to Hope Ministries.

The family of Michelle Edwards created this Life Tributes page to make it easy to share your memories.