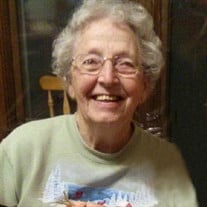 Mildred “Millie” Kuder, 93, of Oskaloosa, passed away Saturday, February 6, 2022, at Crystal Heights Care Center in Oskaloosa. Mildred Lucille Kuder, daughter of Howard Harvey and Myrtle Bell (Rush) Hughes, was born February 12, 1928, in Boone, Iowa. She was a 1946 graduate of Boone High School. She and her husband farmed, and she was very active in the operation of the business, and she enjoyed raising Dorset sheep for many years. She began working as a typist for St. Paul Insurance Company in the mid-70s and into the 80s. In her spare time, Millie enjoyed quilting and sewing. She made countless gifts for her children, grandchildren, and great-grandchildren through the years. She also raised Dorset sheep for several years. Her family includes her daughter, Janie Tordsen of Rose Hill, and her son, Robert (Michelle) Kuder of Rose Hill; a granddaughter, Penni (Craig) Winegar of Rose Hill and a grandson, Keith Kuder of Oskaloosa; nine great-grandchildren and three great-great-grandchildren. In addition to her parents, she was preceded in death by a grandson, John Carter, five sisters, and one brother. A private family visitation was held for Mildred, and cremation was accorded. The burial of her ashes will be held in Evergreen Cemetery near Leighton. Memorial contributions can be made in her name and will be designated later. Langkamp Funeral Chapel & Crematory is entrusted with her final arrangements.

The family of Mildred Lucille Kuder created this Life Tributes page to make it easy to share your memories.

Send flowers to the Kuder family.