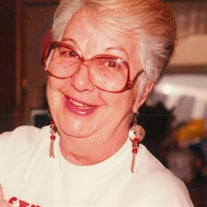 Nadia Crook, 85, of Oskaloosa passed away Wednesday, October 2, 2019, at the Oskaloosa Care Center. Nadia Joyce Crook, daughter of William Jasper and Alberta Mae (Marshall) Musgrove, was born March 31, 1934, in Oskaloosa, Iowa. She attended Oskaloosa Schools and then, as a young lady, moved to Bettendorf. While in Bettendorf, Nadia began her life-long career in foodservice and worked at Ross’ Restaurant. In 1985, Nadia returned to the Oskaloosa area and started a mobile food service and Tuffy’s Snack Bar at Armbruster’s Auction Service; and served food at numerous auctions and other events in the area. Nadia loved to cook; her passion was meeting and feeding people – and people loved her food. Nadia was a member of the Eagles Aerie, The American Legion Auxiliary, and was a former member of the Moose Lodge. She enjoyed bowling and playing board games with family and friends. She never knew a stranger and enjoyed engaging in conversation and making new friends. Her family includes her children: Kyle Eugene Parker of Oskaloosa and Dyann Kay Parker of Camanche, Iowa; her siblings: Anita Brady of Oskaloosa, Jerry Dale (Sharon) Musgrove of Columbus City, Iowa, Tonya (Ted) Bellon of Mt. Sterling, Iowa, and Brian (Maria) Musgrove of Columbus Junction, Iowa; and a sister-in-law, Elaine Musgove of Oskaloosa. In addition to her parents, Nadia was preceded in death by two infant sons: Donald Brian Parker and Lewis Chester Parker, Jr.; brothers: Calvin LeRoy Musgrove, William “Billy” Musgrove, and an infant brother, Keith Wayne Musgrove; sister: Karen Sue Blank; brother-in-law, Russ Blank; and her step-father, Robert Van Polen. Funeral Services for Nadia will be held at 10:30 a.m., Tuesday, October 8, 2019, at Langkamp Funeral Chapel. Burial will be in Forest Cemetery. Visitation will begin at noon Monday at the funeral chapel; the family will greet visitors from 5-7 p.m., Monday evening. Memorial contributions can be made to her family.

The family of Nadia Crook created this Life Tributes page to make it easy to share your memories.

Send flowers to the Crook family.