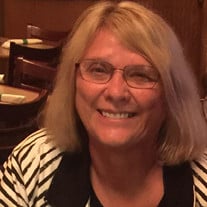 Nancy Marie Coffey, 69, of Oskaloosa, Iowa entered eternal life on April 28, 2019, at the Mahaska Health Hospice Serenity House in Oskaloosa. Nancy was born in Yankton, South Dakota on September 15, 1949, to parents Arthur and Margaret (Krenk) Holt. She grew up on a farm four miles east of Wakonda, South Dakota. She loved the outdoors and farm life, especially planting crops, harvesting, and driving the big tractors. She graduated from Wakonda High School in 1961 and attended the University of South Dakota in Vermillion, SD where she met the father of her two children, Sheila and Bryan. After the divorce, Nancy worked at the VA hospital in Knoxville, Iowa for 32 years in Public Affairs and retired in December 2009. One day, during those 32 years, Nancy met and married Russell Coffey at the Central United Methodist Church in Oskaloosa, Iowa on December 30, 1989. Nancy and Russ have lived on a “gentleman” farm for the past 20 years. Together, and I do mean “together,” they picked morel mushrooms, wild berries, grapes, peaches, apples, gardened, made jelly, held famous fish fries, hot dog roasts, held garage sales, held deer camp, and entertained many friends and family with awesome meals and spirits. Their favorite activity, besides cooking together, was sitting on their patio, watching the deer at their pond and the birds, especially the hummingbirds. Nancy was truly a wonderful “girlfriend.” She was always there when a friend was in need. Her fierce loyalty and nobility will be missed by all who knew her. Nancy is preceded in death by her parents, Art and Margaret Holt, father and mother-in-law, Cal and Nelda Coffey, and brother-in-law, Steve Coffey. She is survived by her husband, Russell Coffey; her two children: Sheila Van Sickle of Dallas TX and Bryan Van Sickle of Knoxville IA; her granddaughter, Lillian Scruggs and great-granddaughter Jennaya of Dallas TX; her sister and brother-in-law, Carol and Glenn Strand of Buffalo Grove IL; her sisters-in-law Connie Wymore and Karen Fisher of Oskaloosa. She also has many nieces, nephews, cousins, family, and many loving friends too numerous to list, but not forgotten. Per Nancy’s request cremation has taken place and no services are planned. Memorials can be made to the American Cancer Society or the Mahaska Health Hospice Serenity House. Langkamp Funeral Chapel & Crematory is handling the arrangements.

The family of Nancy Marie Coffey created this Life Tributes page to make it easy to share your memories.

Send flowers to the Coffey family.