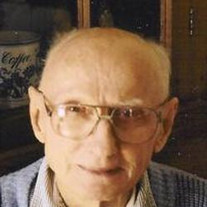 Nathaniel Dare Lamberson: Tip passed away Tuesday afternoon at his home in Oskaloosa at the age of 83 years, 6 months and 19 days. He is survived by his wife, Patty of Oskaloosa; a son, Fred Lacey Lamberson of Point Reyes Station, CA; a daughter, Joan Ratliff of Guthrie, OK; a grandson, Ryan Craver of Waverly, IA; a granddaughter, Morgan Page of Santa Barbara, CA (Ryan and Morgan were raised by Tip and Patty grandsons, Charles and his wife, Kristin Ratliff of Philadelphia, PA and Andy and his wife, Monica Ratliff of Anchorage, AK; a granddaughter, Petra Lamberson of Point Reyes Station, CA; a great grandson, Kasen Ratliff; a niece and four nephews. Nathaniel Dare Lamberson, son of Dare Houghton and Francein Lacey Lamberson, was born February 15, 1922 in Oskaloosa, Iowa. He was a 1940 graduate of Oskaloosa High School, and then attended Iowa State University, where he received his Bachelor of Science Degree in Mechanical Engineering in 1947. Tip interrupted his college career to serve in the military; from Dec. 5, 1942 to July 13, 1946, he served in the Army as an officer in the U.S. Air Corps in Air Transport Command and meteorology. He married Patricia Smith of Cedar Rapids on January 10, 1948. Together, they made their home in Oskaloosa, where he worked at Ford garage for four years, and then he began his 15 year career at Ideal Manufacturing as a mechanical engineer. Tip's passion for music began early in life, when he played flute in the Oskaloosa High School Orchestra. He took up flute playing again when he and Patty returned to Oskaloosa, and he joined the Central College Community Orchestra. An eight year wait for a new flute inspired Tip to manufacture one himself and begin a new industry. N.D. Lamberson Flutes began in Tip's home; he moved the business to ?A' Ave. East, South 11th Str. and finally near University Park. The first flute Tip made, the prototype for the 730 flutes he manufactured and sold the world over, was given to the Iowa State Historical Society in Des Moines. He retired in 1985. Tip served on the Mahaska County Board of Education, as an Indian Hills Community College Trustee, on the Flute Industry Council, and as a Senior Warden at St. James Episcopal Church where he was a member. His love of classical music earned him First Flute in the Central College Community Orchestra; he also played with the Ottumwa Symphony, and the Oskaloosa City Band. Tip was also a pilot and enjoyed flying. Tip was preceded in death by his parents; a daughter, Susan Lamberson Craver; and brothers, Bill and Jack Lamberson. PDF Printable Version

Nathaniel Dare Lamberson: Tip passed away Tuesday afternoon at his home in Oskaloosa at the age of 83 years, 6 months and 19 days. He is survived by his wife, Patty of Oskaloosa; a son, Fred Lacey Lamberson of Point Reyes Station, CA; a daughter,... View Obituary & Service Information

The family of Nathaniel Dare Lamberson created this Life Tributes page to make it easy to share your memories.

Send flowers to the Lamberson family.