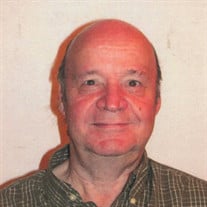 Nick Williams, 75, of Oskaloosa, passed away Thursday evening, September 26, 2019, at Northern Mahaska Specialty Care in Oskaloosa. Nickey Paul Williams was born October 10, 1943, in Cincinnati, Iowa to Keith and Lola Mae (Lappes) Williams. Nick grew up in Oskaloosa and was a 1961 graduate of Oskaloosa High School. He married Linda Scott in 1963, and to this union two children were born. They later divorced. Although Nick’s first jobs were with gas stations in Oskaloosa, he soon began his life-long career in the construction business. He owned and operated Williams Construction for more than 30 years and retired in 1995. It was through his roofing business that he developed a friendship with George Daily. Nick was roofing George’s home and invited George to help. That invitation laid the foundation for what would later become the Daily Trust, which continues to benefit the Mahaska County area in countless ways. Nick had a strong work ethic and enjoyed his work and the people he encountered along the way. He also enjoyed boating and working in his yard. He was a member of the First Assembly of God Church and served as a trustee on the Daily Trust, one of the highpoints of his later years. Nick had an infectious laugh and smile, and he was a friend to many. His family includes his children: Danny Williams of Davenport, Iowa and Robyn (Alan) Schneider of Oskaloosa; five grandchildren: Andrew (Jordan) Williams of Oskaloosa, Joe Williams of Des Moines, Sydney Williams of Oskaloosa, Zach Schneider of Oskaloosa and Jeremy Schneider of Ankeny; three great-grandchildren; a sister, Anthea “Toni” Husted, and a sister-in-law, Judy Williams, both of Sacramento, CA. In addition to his parents, Nick was preceded in death by a sister, Virginia Davis; two brothers: Bob and Dick Williams; and a brother-in-law, Dennis Husted. Funeral Services for Nick will be held at 10:30 a.m., Tuesday, October 1, 2019, at Langkamp Funeral Chapel with Rev. Mike Dotson of the First Assembly of God Church officiating. Burial will be in University Park, Iowa. Visitation will begin after 11 a.m., Monday at the funeral chapel; the family will greet visitors from 5-7 p.m. Memorial contributions can be made to Stephen Memorial Animal Shelter.

The family of Nick Williams created this Life Tributes page to make it easy to share your memories.

Send flowers to the Williams family.