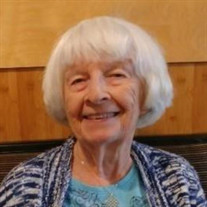 Norma Louise Gasperi, 96, of Des Moines, formerly of Keomah Village, Oskaloosa, passed away on October 20, 2020, at her home in Des Moines, Iowa. Norma Moore was born on September 20, 1924, at her grandfather’s farmhouse across from the White Oak Church in Thornburg, Iowa, to parents William Clair Moore and Elizabeth McKay Moore. Norma received a teaching certificate from the Iowa Teachers College and an English degree at Drake University. She taught high school in Gibson, Iowa. Norma married Raymond James Gasperi on July 26, 1947, in the White Oak Church in Thornburg. After Ray completed his mechanical engineering degree at Iowa State University, they moved to Texas and raised four children. Ray’s work with Shell had them move to California, New Jersey, Pennsylvania, and Illinois. After retirement, they returned to Iowa. Norma made new friends and kept in touch with many. She enjoyed belonging to the First Presbyterian Church of Oskaloosa, AAUW, Eastern Star, book clubs, and loved playing duplicate bridge. She and Ray traveled to many locations around the world, including visits with relatives in Austria and Italy. They opened their home on the lake to many visitors from near and far. Norma hosted countless family events and felt it was important to keep family together. We share the memory of her kind and generous nature and all the delicious dinners and large assortments of cookies, pies, and treats she would share with so many. In addition to her parents, Norma was preceded in death by Ray, her son Jim, and her brother Jim Moore. She is survived by her children: Betty (Mike) Sullivan, Ankeny, Gigi (Dan) Vance, Des Moines, Doug Gasperi, Des Moines, and Jane Gasperi, Des Moines; grandchildren: Kristi Sullivan (Cary Hall), Mary Sullivan, Emily Cifuentes, Jonathan Vance, Jessica (Bill) Friend, and Jeffrey Gasperi; great-grandchildren: Aaron and Haley South, Enzo Cifuentes, and Ali and Georgia Friend. Thanks to the caring and helpful staff at Edencrest and the therapists from Kindred at Home. Funeral services for Norma will be held at 10:30 a.m., Saturday, October 24, 2020, at Langkamp Funeral Chapel with Reverend John White of the First Presbyterian Church officiating. Burial will be in Forest Cemetery. This service can be viewed at Langkamp Funeral Chapel’s YouTube Channel later in the day. Visitation will be held from 10 a.m. to 6 p.m., Friday at Langkamp Funeral Chapel. The family will greet visitors from 9:30 a.m. to service time on Saturday morning. According to the rules put in place by the Iowa Department of Public Health, proper social distancing and appropriate personal protective equipment are advised for attending this public event. The family requests that all those attending wear masks. Memorial contributions can be made to the First Presbyterian Church.

Norma Louise Gasperi, 96, of Des Moines, formerly of Keomah Village, Oskaloosa, passed away on October 20, 2020, at her home in Des Moines, Iowa. Norma Moore was born on September 20, 1924, at her grandfather&#8217;s farmhouse across from the... View Obituary & Service Information

The family of Norma Gasperi created this Life Tributes page to make it easy to share your memories.

Send flowers to the Gasperi family.