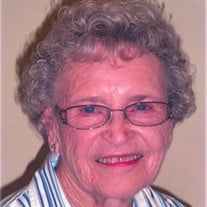 Norma Leona Whitlatch, 95, of Oskaloosa passed peacefully in her home on Wednesday, March 28, 2018, surrounded by family. Norma was born to William and Viola (Robbins) Brown in Lovilia, Iowa where she attended school. Norma was united in marriage with Gordon "Tony" Whitlatch. They resided in Albia and later made their home in Oskaloosa. Norma raised her children and also managed Dairy Queen for more than 20 years. She enjoyed sewing, baking, camping and spending time with her family. Norma had a heart for Christ, and she was called to serve as a Sunday School teacher at Oskaloosa Community Church and later at Lifehouse Community Church, where she served as an active member for more than 50 years. Although many lives were influenced through her gift for teaching God's word, her true passion was working with the little children and the many hugs she received. She was known to her church family as Miss Norma and was truly an angel here on Earth. Norma is survived by her daughter, Marlys (Jim) Blanchard and son, Dennis (Cathy) Whitlatch and three grandchildren: Laura (Dennis) Freeman, Kathy (John) Payne and Anthony Whitlatch. She is also survived by her sister, Barb McClun, and brother, Dan (Elaine) Brown. Norma also loved and cherished her 8 great-grandchildren and 8 great-great-grandchildren, as well as many nieces and nephews. She was preceded in death by her loving husband Tony, her parents, and four brothers: Don, Alvia, Bill, Larry and infant Gerald, her sister, Dorothy and well as her granddaughter, Jennifer. Funeral Services for Norma will be held at 10:30 a.m., Saturday, March 31, 2018, at the Life House Community Church with Pastor Steve Howe officiating. A family prayer service will be held at 10:15 a.m. prior to the service. Burial will be in Forest Cemetery. Visitation will begin at 11 a.m., Friday at the Langkamp Funeral Chapel; the family will greet visitors from 5-7 p.m., Friday evening. Memorials can be made to Lifehouse Community Church or to MHP Hospice Serenity House.

Norma Leona Whitlatch, 95, of Oskaloosa passed peacefully in her home on Wednesday, March 28, 2018, surrounded by family. Norma was born to William and Viola (Robbins) Brown in Lovilia, Iowa where she attended school. Norma was united in marriage... View Obituary & Service Information

The family of Norma Leona Whitlatch created this Life Tributes page to make it easy to share your memories.

Send flowers to the Whitlatch family.