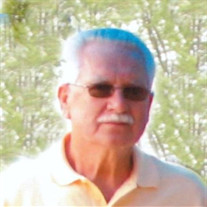 Paul Ward, 83, of Oskaloosa passed away Sunday, March 17, 2019, at the Mahaska Hospice Serenity House in Oskaloosa. Paul D. Ward, son of M. Reed and Violet Pearl (Wignal) Ward, was born June 15, 1935, at the home of his parents in Knoxville, Iowa. When Paul was a youngster, the family moved to Tracy, Iowa and when he was old enough, he carried newspapers for the Oskaloosa Herald and the Des Moines Tribune and also worked for area farmers. Paul attended Tracy schools where he played baseball and basketball. He graduated in 1953 and then went to work at Rolscreen in Pella. Paul married Colleen Marshall, October 9, 1953, in Lancaster, Missouri. They made their home in Ottumwa, where Paul worked at the power plant. After two years in Ottumwa, Paul and Colleen moved to Oskaloosa, and Green’s Ford Garage hired him in the service department. Clay Carriker later bought the dealership and sent Paul to the Ford Marketing Institute in Chicago, where he studied service management for three weeks in the early 1960s. Eventually, Paul went to work for J.P. Summers Chevrolet, which became Lafrenz Motors; and he later worked at Walker Motors. Paul finished his working career at Oskaloosa Engineering where he was a machinist. Paul served on the Oskaloosa City Council for seven years; he was a former member of the Eagles and the Elks Lodges. He enjoyed traveling with his wife, siblings, and friends. Woodworking in his garage was something he enjoyed well into his older years. His family includes his daughters: Vicki (Rocky) Stevens of Oskaloosa, Julie Van Englehoven of Oskaloosa, and Sheli (Bobby) Carter of Glidden, Iowa; seven grandchildren, five great-grandchildren and four great-great-grandchildren; brothers: Kenneth (Eileen) Ward of New Sharon and Merrill (Shirley) Ward of Knoxville; a sister, Connie (Bill) Thomas of Knoxville; and several nieces and nephews. In addition to his parents, Paul was preceded in death by his wife, Colleen on January 15, 2012; brothers: Keith and Roger, and a sister, Jean. Funeral Services for Paul will be held at 11 a.m., Wednesday, March 20, 2019, at the Langkamp Funeral Chapel with Pastor Alvern Boetsma officiating. Burial will be in Forest Cemetery. Visitation will begin after 11 a.m., Tuesday, at the funeral chapel; the family will greet visitors from 5-7 p.m. Tuesday. Memorials can be made to the Children’s Miracle Network.

Paul Ward, 83, of Oskaloosa passed away Sunday, March 17, 2019, at the Mahaska Hospice Serenity House in Oskaloosa. Paul D. Ward, son of M. Reed and Violet Pearl (Wignal) Ward, was born June 15, 1935, at the home of his parents in Knoxville,... View Obituary & Service Information

The family of Paul D. Ward created this Life Tributes page to make it easy to share your memories.

Send flowers to the Ward family.